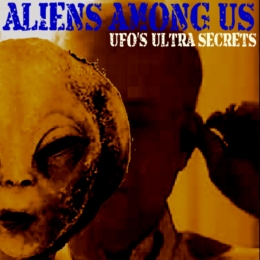 WWW, April 2008 - The UFO situation goes much further than watching light shows in the nightly skies. Abductions of humans, for example. In "Aliens Among Us", we are introduced to this disturbing element of the phenomenon.

Meet Whitley Strieber, best-selling author of fiction and non-fiction books. He is a well-known figure within the New Age and UFO communities where he functions as the host of a talk show called "Dream Land". It's a program that covers everything from crop-circles to UFO's, from reincarnation "experiences" to conspiracy theories.

He's the kind of guy you would expect to worship the "aliens" that are usually associated with UFO's. Especially when you know, that Strieber has been in contact with "the Greys", a particular type of "ET".

However, Whitley Strieber will not go so far.

In this video, we will be introduced to the man as he talks freely about what he knows and about what he doesn't know. Strieber knows that the things he experienced are real, physically real, but he thinks it could very well be so that he is the victim of some bizarre mind control project of the US government.

Strieber is not the only one to appear in this remarkable piece of footage. Other abductees are present, as well as a researcher who is very concerned about the abduction phenomenon.

The evidence is overwhelming, that there is indeed some kind of Plan to create a hybrid between humans and these so-called extra-terrestrial beings. A Plan that "co-incidentally" exactly matches the prophetic description that Jesus Christ gave about the "last days", when He said that these days are like the "Days of Noah".

In these days, the Watchers or Sons of God "came down" to create an unholy offspring between them and human beings called the Nephilim. These Nephilim were the reason why the Most High sent the Great Flood that is described throughout the entire planet by almost all ancient accounts.

Video's like this one, as well as propagandists like Zechariah Sitchin, are obviously created in order to prepare the human race for the inevitable exposure of the Plan as Babylon System prepares to re-install "Atlantis" or the Days of Noah.