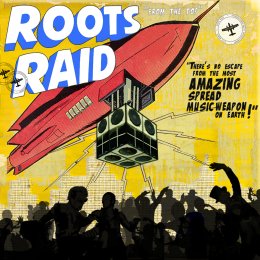 WWW, September 2014 - Get ready for something really, really crucial: Roots Raid's "From The Top" is an album that you just have to hear. And since it's offered as a free download from the Original DUB Gathering Net Label, there is simply no excuse. Read on why.

Roots Raid is a cooperation project of the bassist of the French DUB Reggae Band Ondubground and Bongo Ben. They're based in the heart of the French country and are part of the Eurodub and Roots Movement. "From The Top" is an album where the two producers showcase their art and skills, along with vocalists like Ranking Joe and Billy Berry.

WWW, September 10 2014 - With five input channels at our master mixing board ready to be processed, it's time to add the effects. Before we'll dive a little deeper in fine tuning and stuff, though, we'll add a delay and a reverb which we'll use later in the Dub mixing. You will see why the returns on the mixing board are of little to no use: after all, they're just inputs without any other possibilities attached to them.

It's best to set up the effects according to the following principle: Aux 1 goes to an effect, the output of the effect lands in channel 11 at the mixing board. Aux 2 to channel 12, aux 3 to channel 13 and aux 4 to channel 14. Take a good look at the following video, where you will see (and hear) all of this explained in about four minutes:

By not using any feedback in the delay itself but rather looping it back to a channel, you give yourself full control over the echo's. Unless you really want to have that specific effect, a Dub echo is not just a repeat of itself. The flow of an echo changes, for example by applying certain EQ on the echo's channel input or -as was done in the video- by adding reverb over the echo. And that's what you want: you want to add layers of effects on top of each other.

Bypass the whole return options. Rather treat the effect devices as instruments by giving them their own input channel. By doing so, you have established a potential of countless different effects. You can add EQ over a Reverb, Reverb over a delay, or make even a four layer effect in an instant during your Dub mixing session. Makes it spontaneous instead of pre-programmed.

CLICK HERE TO READ, WATCH AND LISTEN FURTHER TO CHAPTER 25