WWW, March 10 2008 - When researching the Mystery called Babylon, one will always get confronted with two matters: the Great Pyramid in Egypt, and aliens.

Writers such as Zechariah Sitchin and -before him- Erich von Daniken put tremendous effort into making people believe that human beings are "created" by "aliens".

They point out to structures like the Great Pyramid and ask the rhetorical question how these monuments were build, since so-called primitive men were obviously not able to do so.

They will also take ancient documents that describe the gods and how they came down to create offspring with humans in order to create a "super race" which would have the "divine right to rule" over the "mere humans" that we are.


ITEM FOR THIS EDITION:

STEP IT! WALK AND SKANK IT!

STEP IT! WALK AND SKANK IT!
DUBROOM MP3 REVIEW 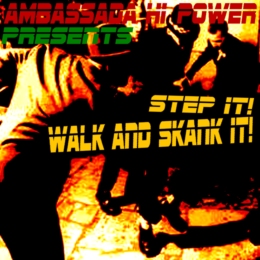 WWW, March 2008 - Since the late 1970's, they have been blessing the (DUB) Reggae massive. And now, the UK based Sound System Ambassada comes again with some Hard Steppin' Dubs and Heavy Skankers to bless up the online (DUB) Reggae Community.

DJ Ian Irie has this special talent to mix all kinds of styles of Reggae Music, even from all kinds of times and places, into one long non-stop mix that stand on it's own. We've said it before: it's the mark of a veteran selector, someone who knows his Reggae and knows himself to be part of the music rather than a mere player of tunes.

Is there no common thread to be found, then, other than Reggae Music and the selector playing it? The answer is no, as Ambassada's shows are filled with conscious and upfull tunes every time.

STEP IT! WALK AND SKANK IT! is no exception to this golden rule.

The Podcast has a couple of really interesting selections as well, such as a Luciano DUB and Johnny Clarke singing the classic "Fade Away" in a version that has not been heard by most lovers of Reggae Music.