REASON 8.0 IN DUB (2): THE ECHO AND SYNAPSE WETNESS
STUDIO DUBROOM ON PROPELLERHEAD'S REASON 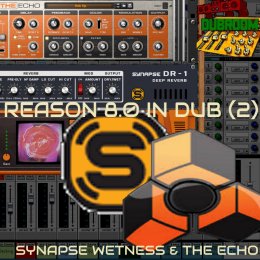 WWW, November 2014 - For this second part of REASON 8.0 IN DUB, Messian Dread created another original riddim and took a thirty-day trial of the Synapse DR-1 Reverb Rack Extension. He also tweaked THE ECHO in what became yet another fat Dub created only with Propellerhead's Reason 8.0. Another report from the studio. 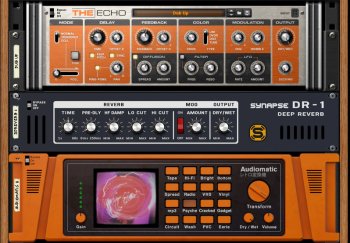 Reason's RV-7000 Advanced Reverb does more than a decent job, especially when you consider it's the standard reverb in a 450 Euro DAW. It has been used by many producers whose choice was the RV-7000. Still, it turns out the blue device doesn't do everything and that's exactly where the DR-1 comes into focus. Taking a thirty-day trial for the 35 Euro Reverb device is free, and it turned out to be a very interesting choice.

Another thing that really needed a deeper review is THE ECHO, Propellerhead's very own "Advanced Delay". To see it live in action during a Dub mix is obviously the best way to discover some of it's features and that's exactly what can be done in this report.

Yet a third thing is the bass. As it turned out, feeding the AUDIOMATIC with the "Psyche" preset, which at it's turn feeds the DR-1 produced a wonderful effect on the bass.

Before the Dub could be mixed, again from eight different audio tracks or stems, the riddim had to be made. Drums, percussion, bass, organ, piano, guitars, horns and vocals. Once again, the NEPTUNE Voice Synthesizer was applied to create some kind of effect on the vocals just because of the vibe it gives. For the vocals, just a few phrases were used. Once again, the bass amp was used for the bassline and two different guitar amps for the two different guitars. The horns went through DR Octorex's own filter before it was rendered to an audio track.

Here you are: enjoy another Dub of Infotainment:

When you would like to compare the DR-1 with the RV-7000, download the MP3 files. The two mixes are identical, the only difference is the reverb device.