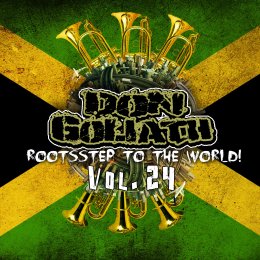 WWW, July 2014 - Yes, it could be that you missed the Dubroom's interview with and review of DON GOLIATH and his unique sound called ROOTSSTEP with links to volumes 1-23 of his ROOTSSTEP TO THE WORLD series. It could be, but it shouldn't given you just had the link provided. Well, you can read on too and check the link later for that's a thing you simply just want to do. Introducing the 24th Chapter of Don Goliath's excellent series and this time he brings U Roy, Wayne Mc Arthur. Victor Tebebe and Princess Black Inna Rootsstep Style!

It's truly incredible to see just what Don Goliath has produced just the last 1 1/2 year or so. In spite of his name, this one Goliath has nothing against Jah and even more, he is active in spreading JAH Music into this next century and generations with his unique sound. It's a sound that many will say is "Dub Step" and not just because of the four-letter word in the term Roots Step. However, this is Reggae and it is even Roots Reggae.

Reggae is a rhythm that one can play in many styles. Roots Reggae is a rhythm and a vibe that one can play in many styles as well. Yes, it is a big mistake to look at Reggae as a genre of music. It's not. It can be that old Studio One Sound, it can be the 21st Century Rootsstep Sound, but it remains to be the same rhythm. This, in a nutshell, is Don Goliath's Rootsstep Sound.

This is a sound that gets the support from a whole army of well-known vocalists like U Roy, featured on this album. Not without reason, for what it shows is that the sound might change throughout the generations, the message does not and the music does not.

This is a sound that you should check out and support, when you are positively interested in the promotion of (DUB) Reggae and Consciousness. You will find many, many conscious messages throughout the 24 chapters. Messages that need to be heard by every generation. RIGHT-CLICK HERE for a legal mixtape of the album straight from the Don's website or better: CLICK HERE FOR ITUNES.

Or CLICK HERE for our interview with the Don himself.