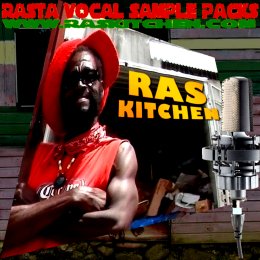 WWW, June 2014 - Meet Ras Mokko a.k.a. Ras Kitchen. Living in Jamaica with his family, he has a Video channel and nationally broadcasted show which is labeled "part cooking show, part documentary, 100% original". He also released two vocal sample packs for DJ's and producers to use in productions, and all he asks is to give him some credit and share your track(s) with him. Deal? Read on...

Jamaican food is like Jamaican music: recognizable and kind of essential when you want to produce some thing. Even though Reggae Music (and especially DUB) have long crossed the border and became international, Jamaican elements continue to be essential. It has even come so far that many, many contemporary music producers use Jamaican vocals or rhythms to define their sound. Just think about DubStep or Drum 'n' Bass.