WWW, May 19 2008 - When researching matters concerning Mystery Babylon, sooner or later you will be confronted with people like Jordan Maxwell.

Claiming to expose the system, in reality they are forwarding the teachings of the Mystery Schools that give the elite their knowledge. By doing so, they initiate their audience into believing how Mystery Babylon is actually teaching the truth.

Does Jordan Maxwell know what he is doing? It seems like it. But it's not so important either, as ultimately this is a matter between him and the Creator.

The point is, that we are all initiated in one way or another. And no, we do not have to be conscious of this ourselves. Still, we have to emancipate ourselves out of it and we can only do so by loving the truth. 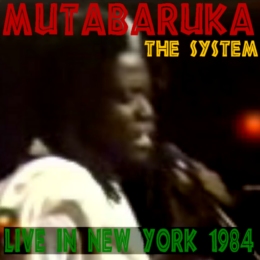 WWW, May 2008 - "It's the second time we play here in New York, maybe there's a third time", Mutabaruka says just before he starts to recite his poem The System together with a backing band.

Although it wasn't Mutabaruka who started the discipline of DUB Poetry, he is definitely one of the strongest in the genre. With his poetry based on Rastafari consciousness, and a solid band to lay a musical foundation, there's much more than just a positive musical experience that you can receive when listening to the words.

In the year of George Orwell, Mutabaruka visits New York city and chants down Babylon with the truth once again, just like he keeps doing until this very day in 2008. 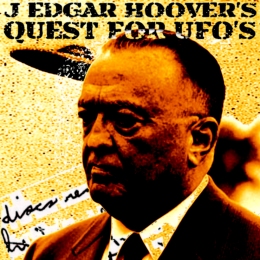 WWW, May 2008 - In an FBI document released under the Freedom Of Information Act, we can find a hand-written memo by J. Edgar Hoover, in which he complains that the US Army "grabbed" crashed "discs" before the FBI could have it for "cursory examination".

In a 69 page document released by the FBI under the Freedom Of Information Act, we can find formerly classified material on UFO's. Not only does the information show that the US Government was well aware of the existance of what many believe to be Extra-Terrestial vehicles, but also that crashed UFO's had been recovered by the US Army.

On page 45 of the document, itself part of a larger collection on the topic, we can find a handwritten memo authored by none other than the infamous J. Edgar Hoover. Apparantly, he didn't just chase communists, he wanted to know all about UFO's too.

The document suggests that the FBI will not conduct any investigation into the UFO phenomena. J. Edgar Hoover says he agrees, but not until, in his own words, the FBI has "full acces to recovered discs". He also refers to incidents where apparantly the US Army denied the FBI acces to crashed UFO's.

The interesting material was dated in 1947, the same year that a UFO was said to have crashed in Roswell New Mexice, close to the airport from where the plane departed that threw the atomic bomb on the people of Japan towards the end of Word War 2.

TRANSCRIPT:
Mr. (name blacked out) also discussed this matter with Colonel L.R. Forney of MID (Military Intelligence Division). Colonel Forney indicated that it is his attitude that inasmuch as it has been established that the flying disks are not the result of any Army or Navy experiments, the matter is of interest to the FBI. He stated that he was of the opinion that the Bureau, if at all possible, should accede to General Schulgen's request.

(Clyde Tolson)
(J. Edgar Hoover)
I would do it but before agreeing to it we must insist upon full access to discs recovered. For instance in the LA case the Army grabbed it & would not let us have it for cursory examination.
See below for a copy of the actual page, and click on it for a larger copy. CLICK HERE to download the document straigth of the FBI website (scroll on to page 45). 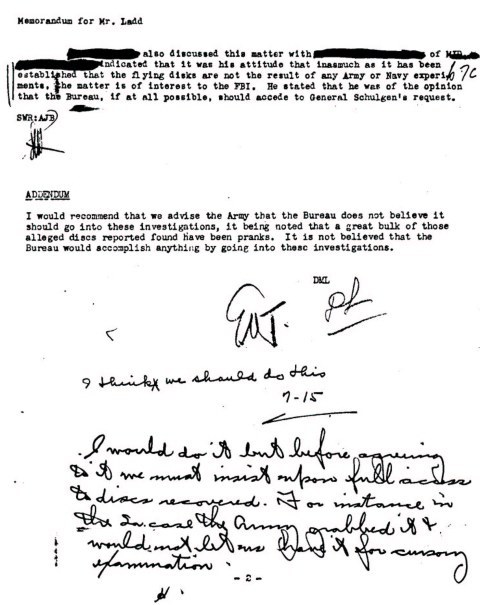