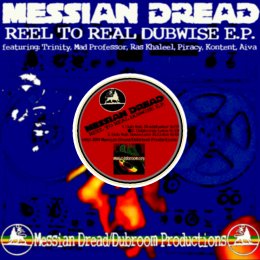 WWW, July 2014 - With a title obviously referring to Mad Professor's excellent REEL TO REEL REGGAE Parts ONE and TWO recently purchased and reviewed by the Dubroom, the three extended DUB mixes on this EP carry only the musical sounds from ARIWA Studio present in the two-part Sample Pack from Loopmasters and no extra stuff other than the vocals. Yes, it's an unofficial promo without apology and equally a full-quality release aimed to please everyone who likes to enjoy their (DUB) Reggae.

Two Steppers and a One Drop riddim: Opening up with a pumping call to praise Jah rather than be afraid for those that seek to harm His children, continuing with Dubhorse Lane (a hint to the street where Ariwa Studio is located in London) carrying Mad Professor's voice and closing with a majestic, very atmospheric Dub that has more than enough message in it to get the point across: while the soldiers march and kill, I and I know that the day will come that JAH shall correct things and I and I cannot wait for that day.

The music was recorded in Mad Professor's ARIWA Studio's and legally obtained for use in Dubroom productions through the purchase of the excellent Reel To Reel Reggae Volumes One and Two. In simple terms, you could say that this is Messian Dread working with and on top of Mad Professor material. Those who know their ARIWA catalogue will surely recognize elements from Michael Prophet's "Rootsman" Album, or the guitar lick from "Africa Must Be Free By 1983". Things are obviously re-arranged and made into original productions, three of which are captured by this EP. Those who know their Dubroom productions will surely recognize Messian Dread's own style of mixing and arranging as well.

From Ariwa's Reels of Reggae to Dubroom's Real Dubwise: Reel To Real Dubwise is definitely one of Messian Dread's hardest Dub releases to date since he started putting his music online back in the late 1990's. Read his more personal comments here

Please do not re-publish the actual music, because unlike Dubroom releases before 2014, this EP is © Messian Dread/Dubroom. Available for free: 128 Kbps/320 Kbps MP3 Files, CD Quality Wave Audio. 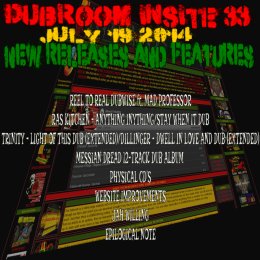 WWW, July 19 2014 -  In the 33rd chapter of Dubroom In-Site, Messian Dread writes about his latest and upcoming musical releases as well as a number of other issues related to the Dubroom website. What can -JAH Willing- be expected, what has been done already, and how's the website doing in general?

Those who have been following the Dubroom lately, must have read about the EP that is scheduled to be released tomorrow. It's an EP with ARIWA recordings which I have transformed into Dub. It's the result of my purchase of Mad Professor's Reel to Real Reggae Parts One and Two, hence the name "Reel To Real Dubwise". Three riddims, which also be featured on a DUB Album I am currently working on. Jah Willing, this album will be released somewhere next month.

RAS KITCHEN - ANYTHING INYTHING/STAY WHEN IT DUB

Producers and other visitors of Studio Dubroom will have read something about Ras Kitchen. He has his own TV Show on Jamaica where he teaches Ital and other Cooking. Living with his family, he receives guests and gives them an authentic Jamaican experience during their stay. Ras Kitchen has also released two vocal sample packs for producers and I've used material from these packs to make two Dubs.

In a way, the virtual 7 inch can be seen as a fundraiser. Not for the Dubroom, but for Ras Kitchen. Living in Jamaica as a Ras is not easy at all, in spite of the romantic "Irie Irie Mon" sentiments some might have with the idea. Surviving in a righteous way when all around you there is violence, crime and corruption, wickedness. This means that everyone who has a little bit of money left, and likes the music (when it's released), is humbly requested by me to donate some money to the Ras on his website and tell them the Dubroom sent ya.