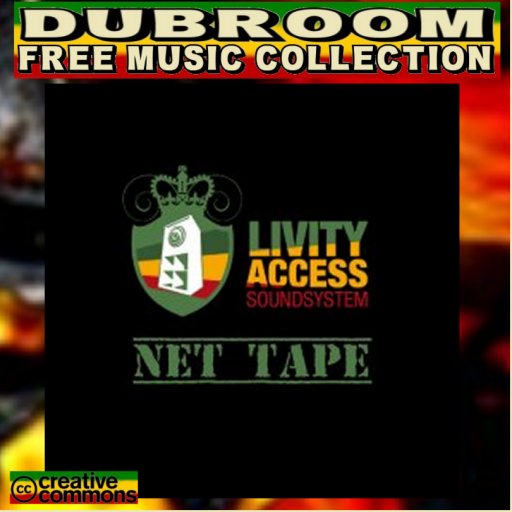 WWW, August 2012 - They're based in Nancy (France), from where they release and perform Conscious (DUB) Reggae in a very pure and heartical form. On their WEBSITE, you can find video's capturing the Ire Vibes and on the album "Net Tape" you can enjoy some of their own productions Inna Showcase Stylee!   Featuring guest vocalists like Mighty Howard and Solo Banton, Livity Access' "Net Tape" contains 15 titles, out of which there are several vocals with their Dub versions. The excellent "Ire Soldiers", for example. Or "Manifest", a call to legalize the herb instead of maintaining repressive laws on herb, based on lies.

Then there is "Meditation" featuring Mighty Howard: the vocal part is done with a One Drop style where the Dub has a Steppers drums. An interesting concept. So interesting, that they continue with the idea in the Vocal part of "Always War", quoting Haile Selassie's famous speech which was set to English by Bob Marley.

"Net Tape", all in all, should definitely belong in your collection of contemporary productions from the European (DUB) Reggae Underground. We need much more upfull and positive vibes, so give thanks to FRESH POULP for the release!

WWW, August 2012 - It's so amazingly obvious that it's genius: a compilation based on that instrument which "every" DUB producer has used at least once, other than the bass or drum. If only for this, the DUB VIBRATIONS NET LABEL should be applauded for their original idea to create a compilation of DUBS with the Melodica. But there's more...

This is not just a gem for DJ's and selectors, although it is kinda nice to have a set of very, very nice DUB tunes with melodica at hand. Because that is exactly what this album actually is: a very nice album filled with crucial DUB tracks from some well-known and lesser known names in the online scene of DUB producers.

The album gives a pretty good idea of what came out of the original "Far East Sound", established when virtuous keyboard player August Pablo started blowing the melodica over DUB tracks. The Far East has become the World Wide Web, which becomes clear throughout the over one and a half hour long compilation. Everything perfectly mastered by Don Fe from the DUB VIBRATIONS NET LABEL in his Spain-based studio, by the way.

El Bib, the other half of the duo that runs the label, takes and also deserves the credits for the excellent selection. The tracks showcase the melodica by simply exposing the versatile nature of the instrument in a DUB Reggae environment.