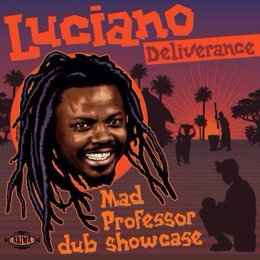 WWW, September 2014 - What's the difference between a Showcase and a Dub Showcase, Ariwa Style? Well, the fact that not every vocal track is followed by it's Dub (which you can easily change in your player) plus the fact that there's an extra Dub version Of "Three Meals A Day" labeled Sound System Dub. Luciano and Mad Professor In Fine Style!

Of course, when Luciano sings into the multi track recorder at Ariwa studio with Mad Professor at the controls he listens to excellent music. Of course, when Ariwa prepares for Luciano they will come with a variety of musical works that will all emphasize a different side of The MessenJah. Of course a collaboration between Luciano and Ariwa brings niceness.

This is a Dub Showcase, not a Showcase and not a Dub Album. This is an album about Luciano, and the Dubs are there to recall the vocal tracks while they're still fresh in your memory. While Luciano showcases his many sides, from smooth Lovers' Rock to strong Prophetic Calls and Chants to JAH, Ariwa shows they have just the right music for the right vibe. After all, Roots and Lovers Rock are two specialties of the London-based studio's.

As the album plays for this review, the Dubs are all programmed to be played directly after it's vocal counterpart. That means, no change in the sequence for the first 4 titles. Tracks 9-11 subsequently are three vocals, followed by four dubs. Almost one hour of good vibes, freedom sounds and nice dubwise.

The arrangements, playing of instruments, backing and lead vocals, everything is perfectly worked out. Luciano gives his best, while Mad Professor does his best to emphasize the MessenJah in Dub Showcase style. This is not a Dub style for an all-dub album, this is a Dub style that gives you meditation, gives you some extra time to skank pon di riddim. A Dub style that makes you hear new things every time you play the music.

How shall we call it? What about Roots Lovers Rock Reggae, to combine the two dominant styles on Deliverance Dub Showcase? Mad Professor showing he's not just one of the Dub masters in the world, he knows how to produce music by using top musicians and how to mix Dubs from that music in fine style.

From the very first track, a crucial rendering of Dennis Brown's song that gave the title to this album as well, to the very last one ("Three Meals A Day, No Rent To Pay and No Wife To Obey, Talking Bout Detention....") which is a heavyweight Roots Steppers with equal Heavyweight Dub Mixing, this album is what it says. This is Mad Professor showcasing Luciano in his own special style.

So, what was that about an extra Dub version called Sound System Dub? This is Luciano singing from the top to the last drop with Mad Professor mixing the music in Dub style.

Get all tracks, or just a few. When you're into Dub, get the Dub from "Three Meals" called "One Dub A Day".

The cheapest place is Emusic and no we do not get paid to say that.

Finalizing the FX Set Up (Making Dub With Computers Chapter 26) 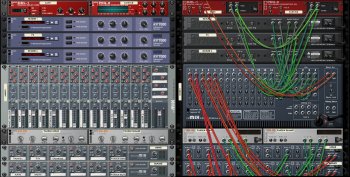 WWW, September 11 2014 - The previous chapter gave us a little feeling about the Dub we're going to make later. We've set up a simple but effective Dub delay and this chapter we will add more effects. Before we will, though, let me separate between two kinds of effects and briefly explain their function in a studio where the purpose is to make DUB.

Let me exaggerate a little bit, just to make a point. Let's say that until DUB was first created (or perhaps even discovered by accident), effects like delay and reverb had the function to enhance the sound of instruments and singers. Still, in much form of musical recordings this is the way effects are used. With the introduction of DUB, the effects became instruments just as much as the engineer became a musician if you will.

I know, there's all kinds of "buts" and thing when it comes to the actual historical unicity of DUB when it comes to the transformation of effects from enhancements to instruments if you will, but for this tutorial it's more than perfect and the reason for that is, that you actually want effects that enhance the instruments while you want to keep playing with other effects.

In our case, we will use a reverb which we'll apply just a little bit on every channel where we'll use the reverb we already created as a Dub reverb. We will also add just one more effect, preferably some sort of simulation of the Roland Space Echo. An echo device that in itself lets you do all kinds of weird things. When you do not use Reason 3.04 or up, you could use some kind of VST effect or something like that. It doesn't really matter, after all it is your inspiration and choice of effects that will make your sound. This is merely a guideline.

We'll put the Space Echo on Aux 3 and the Reverb we'll use you enhance the sound of the instruments at aux 4. Make sure (if possible), you select aux 4 to Pre rather than Post. When you do so, opening aux 4 will give signal to the Reverb device even when the channel's volume slider is put all the way down. When you select "post", the volume of the aux out will correspond with the volume on the channel volume slider.

We'll also add two phasers. Or three, if you like. Since we made sub mixes, it should be possible to send an aux out from that sub mix to an effect device and route it back to the submix. We'll add a phaser to the horns and the skanks submixes. This will give us a phased skanks and horns rather than dry ones. It's just a little bit nice. Of course, you could add another effect like a filter or flanger, chorus, what have you.

Take a look at the following video, where you can see everything in action. It sounds more complicated than it actually is, once you discover the logicalities behind everything. Remember, what we're doing is making it as easy as possible for ourselves so that when we're Dubbing we don't have to worry about anything else.

CLICK HERE TO READ AND WATCH AND LISTEN FURTHER