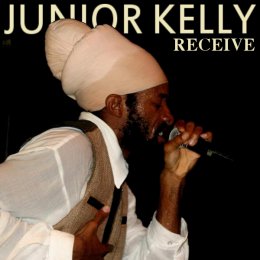 WWW, July 2014 - Contemporary Jamaican Reggae, with Junior Kelly riding the smooth riddim alongside backing vocals and a well worked out arrangement is something we can only thankfully... receive. As far as we could tell, the track was released on 7" vinyl in Jamaica and is now also available for free download at Junior Kelly's Reverb Nation page.

Junior Kelly shows just how versatile he is. A heavyweight Roots Rasta track or a more smooth one like this: he is perfectly able to voice the riddim and share a good vibration while doing so. Download "Receive" and while you're at his page at Reverb Nation, consider buying a track or two more. 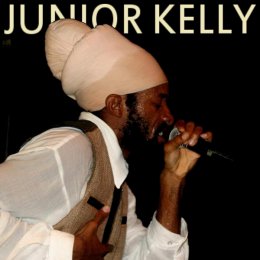 WWW, July 2014 - Junior Kelly's life hasn't been easy. Born and raised in Kingston, he saw his older brother -a DJ for Kilimanjaro Sound System- brutally murdered. That's right, and on top of that his brother was the primary source of income for the whole family. He was also the example for his younger brother, who since then has been working hard to spread a positive message as a vocalist.

Knowing about this background of Junior Kelly can only lead you to a deep sense of respect for the Jamaican singer. Someone who does not turn to violence and criminality but instead uses music and spirituality is -or should be- an example to many. His affiliation is with the House of the Bobo Shanti and thus with artists like Capleton and Sizzla, but musically he takes a different direction and with that, he appeals to ones who prefer their Reggae sung rather than chanted over.