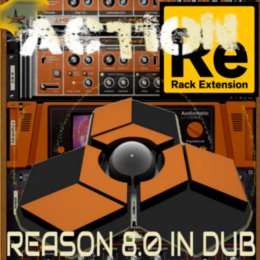 WWW, November 2014 - After the very well received review of Reason 8.0 especially for the DUB Community, the Dubroom continues to explore and review Propellerhead's flagship. In "Action Rack Extension", Messian Dread mixes eight audio tracks into a heavy DUB using all six FX outputs on Reason's console. A report in sight and sound.

The best way to explore Reason, obviously, is to create riddims and make a Dubs from them. This is exactly what has been going on these last weeks over here in the Dubroom. At a later stage, more about creating riddims with Reason. For now, just the report that creating riddims is a true joy and Reason has a positive role in the inspiration.

Reason runs in 64bit on a machine with 8 Gigs of RAM and Intel processors of the newest kind. The software was loaded with drum computers, sound modules, loop players and of course the Neptune voice synthesizer. As soon as Reason hit the ceiling, the riddim was rendered to hard disk in the form of eight multi-tracks or stems. Unfortunately these multi-tracks cannot be shared as that would go beyond the Dubroom's license, but the result can be witnessed in the form of a You Tube video you can watch later on in this report.

In fact, making a DUB from an audio multi-track is the authentic and original way of making DUB. This is how the music came into existence, as the Jamaican studio bands played one riddim after the other into the multi-track recorder and the DUB engineer turned everything into that music we all love to play so much. This is exactly how the DUB for this report was made.

Reason was set up with eight audio channels, one for sound FX, and six console input channels for all six auxiliary outputs. Yes, six different effect devices are used in this particular set up. Their output goes to console input channels. Over here, we don't deal with returns but you can read about these things elsewhere in the studio. 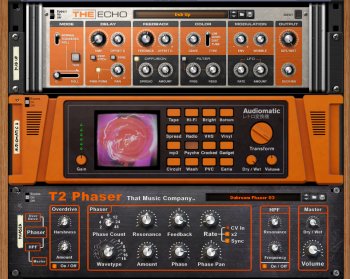 Next to different RV7000's for delays and reverbs, The Echo was put in there as well as two Audiomatic devices. The Audiomatic is a Rack Extension, Propellerhead Reason's very own plug-in format. It ships for free with Reason 8.0, just like the excellent bass amp responsible for the warm and deep bass sound in this mix.

Another Rack Extension used is the T2 Phaser (review). You can download and use the device in your Reason rack for free for 30 days or decide to buy it. It's only about 15 euros and worth much more than that. In fact, for DUB created only with Reason the T2 is obligatory.

Rack extensions work like any other device you can load in Reason's rack. Connect them, make a sequencer track and start recording your automation.

The T2 and the Audiomatic Rack extensions turn out to integrate fully in a DUB environment. The Echo on top of that gives that extra touch but at this time, the device is not fully tested so there is much more potential than the stuff you can hear in the mix created for this report.

After an initial sound check on the correctly connected set up, finally the DUB could be mixed. An exciting moment. This would show how much is true concerning Propellerhead's claims about workflow in Reason 8.0. Will there be hick-up's when the loop points are changed? Will everything be in sync in the first place? How about latency when you use the on-board soundcards with an ASIO4ALL driver?

Everything went extremely smooth. Six different effects that take up their processing power, not to speak about the console itself and the eight different audio tracks can all be handled in virtual real-time. There's no experienceable latency, as the Reason sequencer records and plays the mixing automation.

The Dub? Check it out:

Both the Audiomatic and the T2 get their fair chance, especially in the second half of the mix when the two effects follow up on each other. The Audiomatic turns out to be crucial in deforming both the bass and the drums. Especially when combined with other effects (reverb), this little big thing can drive your mix to a next dimension. The T2 (reviewed here) is a very, very decent phaser that works excellently as well.

The RV7000's and the manual delay do their thing. A ping-pong delay, a reverse reverb and a more or less standard hall effect for the RV7000 devices. The Echo is tweaked at a certain point showcasing some of it's potential, but there has to be some deeper exploring of the delay.

Even though not so much effort was put in the actual riddim, the result is a very reasonable Dub mix. Mixing the Dub is a true pleasure, and Reason's workflow plays a part in it, definitely. The technique behind the automation and everything is very high in quality and low in causing problems. 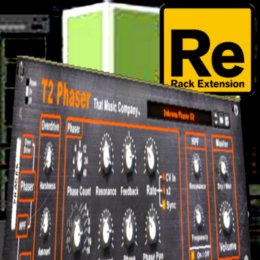 WWW, November 2014 - The in-program phaser in Reason is not the DAW's strongest feature. This very fact has been picked up by "That Music Company": they developed a very fine phaser which can be yours for the price of about 15 euros. Presenting the T2 Phaser Rack Extension!

Rack Extensions. It's Propellerhead's name for the Reason internal plug-in format. You get a few when you purchase Reason, you can download one or two for free but the bulk can be discovered by visiting the "Prop Shop".

For a DUB engineer, browsing the Rack Extensions can be, well, time-consuming. After all, most are aimed at the production of EDM ("Electronic Dance Music") and will not really add much to the standard effects and instruments in Reason.

Not so with the T2 Phaser (see picture, click to enlarge). It's the second device created by the small Rack Extension developer "That Music Company", based in San Jose (California, USA) and it truly is an extension to your rack.

First thing that stands out is the price. For about 15 euros, the T2 is yours. That's fifteen euros to de facto replace Reason's standard phaser because as soon as you run the T2 in your set up you'll hear the power in the thing.

It basically has three main sections: Overdrive, Phaser and HPF (Hi-Pass Filter). Overdrive and HPF will add vibes to the main sound the Phaser section produces. You can set waveforms and on top of that, different steps. Pan effects belong to the possibilities too, you can even trigger the T2 by midi notes.

Got Reason? Get the T2. It's that simple. Just download the phaser, you will have thirty days to discover the fully functional device before you will undoubtedly decide to have it permanently in your effect collection.