WWW, March 6 2009 - The Dubroom is under continual construction, as there are always new things to add, dead links have to be removed, et cetera.

From time to time, it is necessary to even renovate the site. Sometimes out of choice, sometimes caused by events. Take the disappearance of Xsorbit, for example. The company stopped paying their bills and boom, off-line.

It wasn't my choice to change providers, but I must admit that I was kind of not really satisfied with the possibilities of the old Dubroom Message Boards. '

So, when it turned out that Xsorbit was completely gone, even the CEO supposedly running out of the country with the police on his tail because of some fraud issue, I knew it was time... 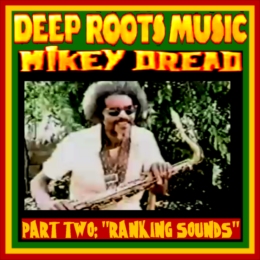 WWW, March 2009 - The second hour of this 6-hour Reggae History with Mikey Dread as our host opens up with Tommy Mc Cook, saxophone player for the Skatalites. He knows all about the Ranking Sounds he helped to shape in the 1960's.

WWW, March 2009 - The second hour of this 6-hour Reggae History with Mikey Dread as our host opens up with Tommy Mc Cook, saxophone player for the Skatalites. He knows all about the Ranking Sounds he helped to shape in the 1960's.

It was a time wherein Rastas could not freely walk in the streets, as they would be persecuted by police. Times of severe downpression, a Great Tribulation. Tommy Mc Cook tells about it. Rasta's took the Biblical warning to go to the hills and it would take a long time before some of them would finally break some of that tribulation.

The Power of Music, or: Ranking Sounds!

Tommy Mc Cook tells the story in word and sound, showing how the beat went down in tempo from Ska to Rock-Steady to Reggae. We also see the full Skatalites band in the Studio as they play the Music into the recorder.

But it was not just the bands who were influential in shaping the music. The Sound Systems were equally, even more important, as they would play the recorded music directly for the people.

Duke Reid was one of them, a former police officer whose widow tells us all about what happened back then. Nuff things: Duke Reid carried a gun, protecting his music and equipment.

The art of Toasting came out of that particular time in the 1960's as well. It was U Roy who first recorded it, but Count Machuki is said to have been the first to do it. He is featured in the second hour of Deep Roots, explaining where his style is coming from.

Next to the Count is Lord Comic. He does not always agree with what is said, and he says so, too. The tune in question is "My Boy Lollipop", which was a great Hit in the UK in 1964. We see a recording from the time, in extreme up-tempo.

As an answer to the question what the original DJ thinks about Reggae DJing in the time that the video was recorded, he says that the biggest difference is that "they now have to find a thing called lyrics". After that, we see a young U Roy in session.

Back to Lord Comic and Count Machuki. They boldly take the microphone and start to chant over the music that was hot in the days the video was shot. The styles of these original Ska DJ's become apparent in an entertaining session full of Comical scenery.

Not everything was comical in the days of the early Sound Systems. The police had their hands full, as well as the several posses that accompanied the different Sound Systems. War and Rumors of War? This is not so uncommon in Jamaica, where sufferation is the order of the day as we see in the video.

For the remainder of this 2nd hour, We see Jack Ruby and his Sound, too. The music has become Rub a Dub style, the technology is further, the DJ's chant it up, the people dance: some things change, some things don't.