WWW, May 8 2008 - Basically, there are two ways to get acquainted with Mystery Babylon and one of these ways is through initiation.

One can get initiated by attending the Mystery Schools like the Freemasons or even by one's upbringing, but the knowledge that comes with being initiated is limited to technological know-how.

For Babylon is a Mystery, meaning: "That Which is Hidden". Babylon has no intention to show what she is all about and therefore she will not show herself to the fullness.

Even stronger: she cannot show herself to the fullness, because even the strongest workers for Babylon would stop their evil deeds if they knew where they are heading to.

Fortunately, there is also another way to find out what's going on, just what this "Babylon" is you hear so many people talk, write, chant and sing about.


Thursday, May 8, 2008
DUBROOM VIDEO/MP3 REVIEW: KALI BLAXX - ONE SMOKE
BABYLON OBSERVER REPORT: THE EUROPEAN TOWER OF BABEL
No comments: Link(s) to this Message

WWW, May 2008 - Jamaican vocalist Kali Blaxx grew up listening to Reggae's stars on the radio, and now he is here to forward the music into this next century.

Watch "One Smoke" and download the MP3 for free, too!

Even though we read in the Bible that "Herb is made for the service of man", Babylon doesn't want man to be served in man's development and thing. And so, there's places on the planet where even one smoke can take you into big problems.

Kali Blaxx knows just how much Babylon's repression on (especially) the youths keeps people down, and decided to do something about it.

In "One Smoke", he defends the freedom given by the Creator to use herb for the service of man. Riding on a contemporary Roots Reggae riddim, the vocalist explains just why the repression on herb should stop.

The video that comes with the tune is directed by Wayne Benjamin, himself a Jamaican too. A well worked out piece of work, providing the right sights with the music and lyrics. 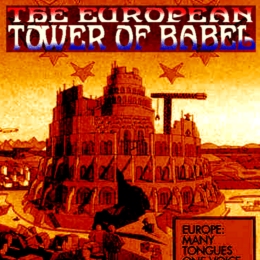 WWW, May 2008 - The building of the European Parliament is directly built after the Tower of Bab-el as painted by Brueghel. In a propaganda poster for the EU, pentagrams are added over the building.

Just in case you didn't know...

In an article recently reprinted for the Babylon Observer, archeologist Jonathan Gray refers to the building of the European Parliament and a propaganda poster for the European Union wherein Brueghel's Tower- of- Babel is obviously the foundation.

Below you can see the painting and the building. Click on the picture for a larger version. In the poster below, you can see how the European Union is not ashamed to identify themselves either. Not only is the European Parliament depicted, hovering over the building are 11 pentagrams with the point down: a symbol of Satan or Lucifer, the Fallen Star. According to some, the above poster is said to be denied for publication. Obviously, the reason for that is that Europe's self-identification is just a little bit to clear.
No comments: Link(s) to this Message