WWW, October 20 2008 - I've been in many reasonings with people who did not want to admit that they themselves are initiated, enslaved, until a certain degree.
Sure, some might admit to it, but do not see it as much further than a slogan. A cliché, even, to stop a deep reasoning.

So it's not just enough to acknowledge the fact that we are all initiated into Babylon Mystery to a certain degree. For the mere fact that -more or less- each and everyone of us have this situation to deal with, makes some of us stop working on it altogether.

Most of us, namely, have been trained to have their own feelings as the standard by which they judge what they have to do or not. 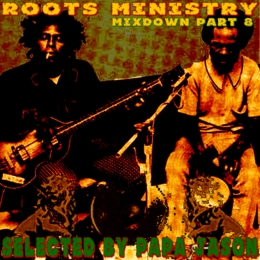 WWW, October 2008 - Selector Papa Jason of the German based Roots Ministry Sound System takes us into a Dancehall vibe extraordinaire! Digital vibes galore and well versatile. When you can take it, that is. 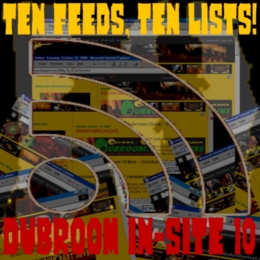 WWW, October 2008 - It's a fact, that not all Dubroom visitors and readers are interested in all things that the Dubroom puts out. That's why there are now 10 different site feeds and mailing lists. Read all about it in the tenth episode of Dubroom In-Site!

WWW, October 2008 - Selector Papa Jason of the German based Roots Ministry Sound System takes us into a Dancehall vibe extraordinaire! Digital vibes galore and well versatile. When you can take it, that is.

Ever since Jammy's came up with the now legendary Sleng Teng riddim, Jamaican studio's have been applying digital possibilities with various results. Some people went wild, while others couldn't apprecilove it at all. The debate continues until this day...

Much has happened after Sleng-Teng, obviously. The specific UK DUB and Roots sound rests heavily on the sound of the Drum computer, for example. But also Dancehall and Jamaican Roots of today has gone digital for a large degree.

The 8th episode of the Roots Ministry Mixdown series takes us -for the most part- back to the early days of the digital era. Many things were kinda new, even revolutionary, and so experimentation was the order of the day.

Simply a very, very interesting experience to hear some of those early digi-tunes again. In a time wherein a whole generation grew up with digital music and many prejudice of back then have faded in the trails of history, it's never a bad thing to know where we're coming from: another service from the Roots Ministry for which we give thanks.

WWW, October 2008 - It's a fact, that not all Dubroom visitors and readers are interested in all things that the Dubroom puts out. That's why there are now 10 different site feeds and mailing lists. Read all about it in the tenth episode of Dubroom In-Site!

It doesn't happen often, but sometimes this site receives feedback from people who do not really like to be confronted with contents they didn't ask for. One can think of someone who is just interested in the music and not in digging into the lyrics so to speak, but it can also be the other way around.

If it were only that, one could say, well, just skip stuff you don't like. Which is usually the case. But there's something else, too.

Thus far, the Dubroom had only one mailing list and site feed: Dubroom Online, with the latest reviews and articles all in one e-mail. In this list, everyone gets something but not enough.

This is now changed.

No, the main list won't change at all. Those who are subscribed will not have to do anything. It's just, that a total of nine lists have been added to which you can subscribe via email or via your browser by the means of site-feeds.

All of this could be done, because of four new Dubroom Weblogs each of which has two different feeds: the postings and the comments. Here's a list of all our blogs (links open in a new window): The blogs have been created in these last weeks. Currently, older material is posted along with the new but that process is entering a final phase. So it could be, that if you subscribe now allready, you might find a few older items in your in-box too. This is especially the case with the reviews.