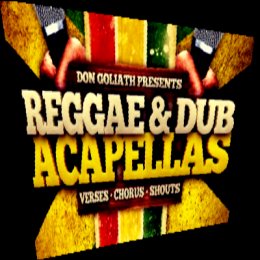 WWW, August 2014 - Introducing what can easily be called the best line of Reggae Vocal Sample packs until this date: "Don Goliath Presents Reggae & Dub Acapellas". Obligated material for every self-respecting (online) Dub/Reggae producer in need for vocals, without apology and exaggeration. Yes, that's a description and not a slogan. And here is the proof and reasoning to back it up.

When you go to the various websites where the online (DUB) Reggae artists/producers upload their material, it will not take too long before you stumble upon a tune that has one of these well known jingles from Mikey Dread's albums, or Prince Far I, or Jah Thomas. Just three, you know. But "everyone" knows them and even though non-commercial releases will usually not be objected, using such vocal samples is not really a sign of dignity.

Producing your own (DUB) Reggae and releasing it in a legal way: let's call it the Dignity Combination.

Sure, there were times when it was simply not possible for your average online Dub producer to obtain vocal material in a legal way and not get bankrupt. Even stronger, there simply was no vocal material available for use in your own productions until more recently, when DUB DROPS released their excellent "SOUND SYSTEM VOCALS" featuring Dennis Alcapone and Horseman. Three releases, all three reviewed in the Dubroom and used in the productions of the studio that is attached to this website.

And now there is the line of Reggae & Dub Acapellas by Don Goliath.

Or, to be more specific, presented by Don Goliath, who also contributed vocally.

When you've never heard of Don Goliath, and you're looking at names like Horseman and Dennis Alcapone as an alternative option, you can make the enormous mistake of overlooking this line of Reggae Vocal sample releases. A mistake which can easily be overcome, though, by continuing to read this (first) review.

Let's carry on dropping names, just to make some points:

All six names have, like Dennis Alcapone and Horseman, legendary status. U Roy can be considered the founding father of DJ-ing, not just in Reggae but in every style of music including Hip-Hop. Lone Ranger has been voicing for Studio One, the starting point of too many careers to mention. Dillinger had a world hit with "Cokane In My Brain", Trinity voiced the classic "Jesus Dread". Before Kojak chanted as a DJ, his got a name as part of the duo Kojak and Liza. Prince Jazzbo features on classic albums from Black Ark and has many essential productions on his own name. And that's just a little name dropping to set the tone.

Yes, you've guessed it. Don Goliath's series has all six of these famous vocalists included. Among much more, that is.