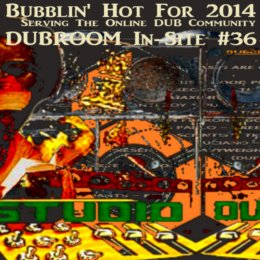 WWW, October 2014 - Well over a month after the release of the first Dubroom album in years, it has been everything but quite before and behind the scenes in the Dubroom. Both on the musical side and on the website, that is. Messian Dread reports and announces a special in-depth review of the recently released Reason 8.0 music production software.

With the EP "Step It Up In Dub" released a few days ago, Reverb Nation updated it's counter to 35 released tracks this year. That's kind of nice to announce as opening for this 36th episode of Dubroom In-site. Next to a virtual 7" featuring Ras Kitchen and Asante Amen, music continues to be released from the Dubroom studio via the Net Label to the world wide massive and this is not going unnoticed.

The Dub Zone Podcast featured Dubroom productions, and so did the very popular Midnight Raver who also listed the Heavyweight Dubwise album as "Bubblin' Hot for 1024" next to Mad Professor and Luciano's "Deliverance" Showcase (Dubroom Review). On top of that, we were played on the October 1st episode of the well known Echo Chamber Radio Broadcast. Of course this is a humbling and thankful experience, as the Dubroom Productions are released to promote (DUB) Reggae and Consciousness much more then our studio, label or website.

Two virtual 7"s have thus far been released featuring vocal samples from Ras Kitchen, whose free vocal sample pack has the daily attention of visitors and users of Studio Dubroom. The packs are to promote the Ras, who makes a humble living and partly depends on donations. The Dubroom is not reluctant to forward this request to all who like our Dub tracks with Ras Kitchen. And we're grateful for Ras Kitchen's Big Up at You Tube!

The Dubroom's purchase of licensed vocal recordings by not just legends like U Roy and Dennis Alcapone but also younger vocalists like Asante Amen and Ras Khaleel sometimes draws the attention of one of the vocalists whose works we're blessed to be able to use. We surely hope that our releases will promote these excellent singers and chanters and when one of them writes publicly "Total fulldorsement from I Rasta!!! Sen it a road :)" we're again humbled and encouraged to continue.

More encouragement came in the form of two articles at the French Culture Dub website, one a review of the Horseman EP. We also received a positive review at the Dubophonic Net label blog and at Dubmassive.org!

Studio Dubroom is a Dubroom subsite especially for producers and artists. One very well visited part of the studio is the tutorial on making Dub with computers. Since this tutorial started way back when, some of the earlier chapters have been re-written while more chapters have been added as well. In fact, there's now a special page from where you can keep track of every update on the tutorial.

There's also a new feature in the studio called "Digital Dignity". It's a portal to all Reggae products at Loopmasters and visiting will provide you with an explanation of the name and with 560 Mb of High Quality, legal and licensed material. Yet another thing that has been added to the studio is a simple page where you can find links and short descriptions of Online Music Distributors (OMD's). Members of the Dubroom Message boards and others are encouraged to add information to this list.

Reason 8.0 in-depth for the Dub community

Now, there's more news for the users and visitors of Studio Dubroom: only minutes after this update is posted, Reason 8.0 will be the topic of the undivided attention of yours truly for quite a while. Yes, the people at Propellerhead have just launched the latest version of their groundbreaking, ultra-flexible and DUB-friendly music production software and over here in the Dubroom everything is going to be reviewed on an in-depth level.

When Reason 3.0 arrived almost a decade ago, the Dubroom reviewed the software and continued to promote it. This is software from a company that has provided a generation of online (DUB) Reggae producers with the means of creating some of the finest works available. Even Reason 3, which is now considered antique, remains to be a crucial tool.

So, what about Reason 8. five versions further?

Expectations are high, but this-and-that has to be verified, tested, studied. Not a thing you do in a day.

Keep an eye on the Dubroom for updates and more, even more releases.