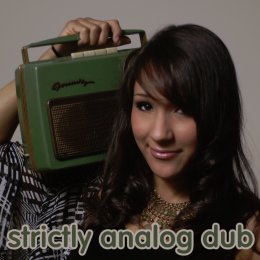 WWW, September 2014 - It comes with the puristic title "Strictly Analog Dub", but Dutch Net Label Dubbhism does not deliver that with this otherwise very interesting and enjoyable free Net Album. No, this is not the first negative music review in the Dubroom. Confused? Read On.

You got purists -some would say fetishists- of all kinds. Reggae purists, Dub purists, Analogue purists, Digital purist, Vinyl purists, ah, well you get the idea. The kind of purism that's brought forward in this really nice album is the analogue purity. That is to say, analogue recording and effects purity. Not all tracks are Dub, not all tracks are Reggae, not all tracks are played with analogue equipment. Unless you would call a drum computer and other obviously sequenced stuff analogue. Like these folks.

WWW, September 14 2014 - Basically, the main thing a Dub engineer does is (un)muting channels and emphasizing these (un)mutings with effects, the two obligatory ones being reverb and delay, or echo. That's something we're going to look at as we continue our version excursion. Just how and where reverb is placed, and different things you can do with delay.

Very common in Dub mixing is adding reverb to snare drum hits, like every 2nd or 4th. When the skanks play, hit one chord with a Reverb attack. Or unmute the skanks and hit the very first chord with a reverb attack. Or the last one, just before you mute. Use a pre-aux and put the volume slider of the drums close to zero while feeding the reverb device with the drums.

Echoes, or delay, can and should not be just a repeat of itself like in the previous chapter. You can change the sound of the echoes by adding reverb on them but also by applying (slight) EQ changes in the echo feed. Or both. You can let the echo run along with the drums while changing the EQ feed, or just make a long echo of let's say a horn hit and change that feed.

he following video contains all the elements described in the previous paragraph. You will see the Reverb device, the Echo and it's EQ plus the master mixing board. In fact, that's everything that's used in this mix. On top of the screen you'll see a few remarks about the mix. Press replay, pause, whatever.