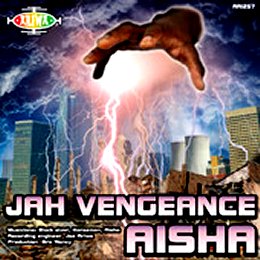 WWW, August 2014 - It has been quite, quite a while since we've heard anything comming from Sister Aisha, especially from Ariwa's studio. This has now changed, even though it's a single we talk about. Complete with a heavy, heavy Dub mix by Mad Professor this is a heavyweight release that should not miss out in your catalogue of conscious Roots Reggae.

Yes, this is a re-make of the Yabby You classic. And what a remake it is! Just like Yabby You, sister Aisha is known to have her spirituality well connected with her musical output, both on stage and in the studio. Just like Yabby You, Mad Professor knows how to capture this spiritual determination on the tape machine or whatever it is they use nowadays in the legendary Ariwa studio.

The classic riddim has not lost one inch or ounce in this 2014 remake. It's arguably stronger, and definitely more contemporary which has it's advantages. As Aisha sings the oh so important lyrics in a way that demands an ear, the music is more than illustrative of the words. It's the riddim itself, sure, but it's the sound of Ariwa as well. A sound that is driven to the fullness in the accompanying Dub, mixed by the Mad Professor.

For a Dub Head like yours truly, the choice between a the Vocal or the Dub version is more often than not, well, just not a choice. It's about the Dub and too much lyrics can become like too much gunshots in a bad western movie anyway. Not with his one, though. It's not just the fact that ones who like Aisha (and who doesn't) will gladly pick up her latest tune simply because it has been too long. No, it's also the fact that in itself, this single stands so strong in it's message, the words are so serious where you hear that yes it's a good singer but there's something more. Yes, much more.

Perhaps that is the reason why the Dub version is so outstanding as well. This is definitely not just a B-side or however you want to call the Dub versions in their digital releases. This is a more than crucial Dub, it's almost like the Mad Professor knew that with such a vocal version you kind of need all you have in your studio to give it at least a balanced counter-weight.

Almost? Of course he knew.

Get the single at ITUNES or even better, get the two tracks free or for just 1 USD at EMUSIC. And check out the vocal at Ariwa's Youtube page.