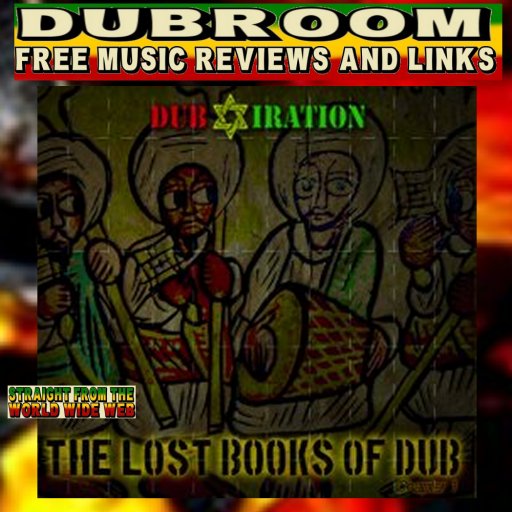 WWW, August 2012 - No less than eighteen tracks are compiled in what hopefully is the first of many to come, and not just because it has some of the top names in UK DUB and Roots in there like Vibronics, Kanka, Alpha & Omega and Zion Train. Or Digitaldubs and Dubmatix from across the Atlantic. And no, not just because it's a free download either. It's all this together and more!

They hail from Guadalajara, Mexico. Their name is DUB IRATION SOUND SYSTEM and they perform, release and otherwise work harder than hard to promote (DUB) Reggae in their area as well as worldwide. For example, by releasing this more-than-excellent compilation of 18 top DUB and vocal tracks.

The album presents a wide variety of different styles, both in the vocals as well as the DUBS. Unfortunately there are no DUB versions of all the vocal tracks present in "Lost Books Of Dub", but that's only a minor issue when you consider the tunes by themselves which is really "all killer no filler" as I and I say.

Let's do a little more name-dropping, just because it says a lot. So whether you like hard stepping DUBS (Kanka, Digitaldubs), or some crucial toasting (Solo Banton, Brother Culture), whether you prefer singing (Dan I), or simply an old-skool touch (Dubiterian), the whole album through you get introduced to more styles and versions. Altogether this is an impressive picture of what is done these days with DUB and ROOTS.

To obtain the album, go to the DOWNLOAD PAGE and fill in your e-mail, after which you'll receive a download link. Make sure, when you're looking for the highest possible quality, to select FLAC in the menu. However, the MP3's sound fine for most usages.


ALBUM DOWNLOAD PAGE
No comments: Link(s) to this Message