NEW SOUNDS FROM THE DUBROOM STUDIO AND OTHER DEVELOPMENTS 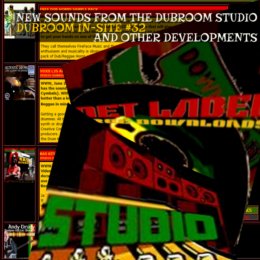 WWW, June 2014 - The last months, the Dubroom has been the scene of more activity than the last two years combined. It all started with a complete website renovation about which we reported in the previous Dubroom In-Site, and continued as the sound from the Dubroom Studio and Net Label also went through quite an update. In the same time, users of Studio Dubroom have seen how significant additions provided them with a lot of new info and soundware. This edition of Dubroom In-Site not only sums it up, but also reveals a little bit concerning exiting new music which Jah Willing be released later in this year. Reasons enough to take a sip and read on...

Sometimes, it is good to take a little bit of rest. The Dubroom started back in 1997 and developed but during the first part of 2014 and some years before that, yours truly had absolutely no energy to continue in the same way. The sound that was developed around 2006, was worn out to say the least. Five albums and well over thirty EP's/Singles, altogether about 130 different mixes, the last one released in this year, 2014. In another update you can already read a little bit about it, but this edition of Dubroom In-Site gives a bigger picture.

Most self-respecting artists and producers will have a sense of unsatisfaction concerning material they have (seen) released in the past. It's called healthy criticism or continual insight, whatever. Usually, such a sense leads to some kind of development but it can take time, sometimes years before anything is actually achieved.

Even though it can take years, an improvement can be done in a short time. Just compare "Dub the Wicked" (MP3) with "Imperial Dubwise" (MP3), the first one released in April and the second in May of this year 2014. The difference is hopefully noticeable, and is not just the result of some financial investments in licenses and hardware. Not just the result of a sense of responsibility and dignity when it comes to using the obtained material. It has to do with inspiration as well, something that is very hard to define. Call it the X-Factor. Personally, I Messian Dread prefer to say the JAH Factor but that will be no surprise for anyone even remotely familiar with I (works).

Now, these past few months it's not just the Dubroom Website where a lot of things are going on. The very same, well, to be quite frankly even more can be said about the Dubroom Studio. Thus far, only a couple of tracks have been released but much more is produced, just not released. A sneak preview is given in......