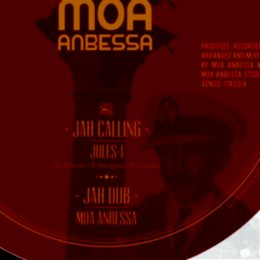 WWW, August 2014 - After five years of silence in the vinyl area, the Italian Dub collective MOA ANBESSA has scheduled a 12" release for September 15 in this 2014. The Dubroom had a chance to listen and wholeheartedly recommends all vinyl addicts to go and order the 180 grams of Roots Reggae Ireness from the Venice crew before it's sold out.

It's almost impossible to follow the Dubroom and not know about Moa Anbessa. This collective of conscious Singers and Players of instruments (including the mixing board) stood at the root of the -now online legendary- Italian Dub Community Showcase series, while their productions are well sought after by selectors of major Sound Systems like Aba Shanti-I and Jah Shaka. This is Roots Reggae (Dub) in it's finest form, namely that of the conscious kind. It comes with the kind of communication that actually fits the massive sounds of the drum and bass lines.

They have no need to be introduced when you have downloaded the Italian Dub Community Showcase series. Solid as a rock, the Rock that is that solid foundation. The musical vibes go straight to your heart, and so does this vinyl release. Even more: those who know their vinyl usually prefer it over MP3 or even CD because of the lower frequencies and they definitely want these tunes.

Actually, we're talking about two vocal tracks with their (separate) Dub/Instrumental counterpart. Two singers, too: Prince David and Jules I. Both are part of the Moa Anbessa collective, and both tracks have served as Dub Plates for the well known Aba Shanti-I Sound System until they were printed on this 12 inches of Righteousness. In fact, this release is not planned to be anything else but what it is: a stricktly vinyl release.

Both Prince David and Jules I deliver a very strong message. Actually, it is a call and a message. A remembrance call to all people, that is. A remembrance call to praise the Creator, to start following His ways rather than the vanity that Babylon has to "offer". It's a message of strength and encouragement to all those that are already aware that we have a Creator and that He must be praised. Yes, this is the kind of Roots Reggae that is so desperately needed in so many places all over the globe. Both singers deliver their call in a very heartical way, a way that can never be matched by the Babylon Industrial voices pushed into our ears each and every day.

Now, the music and especially the Dubs. Both tracks are steppers. "Watch Them" would musically be the sugar part, "Jah Jah Calling" the spice. Of course this becomes all too clear when you're listening to the Dubs. Or, to be more precise: an instrumental and a Dub. "Watch Them" comes with a pure instrumental (often called "pure riddim"), "Jah Jah Calling" is followed by it's militant, hard stepping Dub version. The production itself is clear yet fat, evidently mixed for vinyl.

A very, very fine release that is expected to be in the better Reggae stores both online and offline from September 15, 2014. Phasebookers (and non-phasebookers) should visit https://www.facebook.com/MoaAnbessaItaly/ or http://controltower.fr to (pre-) order the release. Unfortunately, Moa Anbessa does not have a website of their own but these two links destroy that excuse not to buy the vinyl. Also, watch out for another release planned for November 2014.