WWW, August 24 2014 - Another recent Dubroom production hits the airwaves at YouTube via this video. Dennis Alcapone chanting, Dubwise mixing, and just a little bit further when it comes to handling the video editor in this 7th official Dubroom Video release.

Creative Commons and other free to use material for non-commercial productions fortunately is readily available on the Internet. Perfect to use as visual companion to the free audio releases. At least, that's the way the Dubroom videos are produced. Watch the end-notes at the video for more info.

This video is an official Dubroom release. Feel free to embed on your site, blog or phasebook. 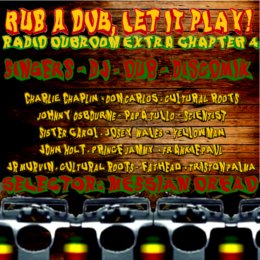 WWW, August 2014 - Today, the music in this non-stop show would be labeled "Roots Reggae". This has not always been so: Jamaican music developed from the early to mid 1980's into a style called "Rub a Dub". Early digital technology entered the studio's, gradually replacing the old tape echo's and providing a fatter sound. Rub a Dub style, let it play!

Actually, this was the time when your selector became conscious and a lover of (DUB) Reggae Music and heard several tracks featured in this show when they first came out. Starting with the first one: a fat Dub of which a vocal track will come later in the mix ("Groove with Me"). Another Dub follows in classic Rub a Dub sound, after which Sister Carol opens with yet another fat Rub a Dub riddim that will definitely shake up the place.

And that's just the introduction.

Charlie Chaplin is next, riding a riddim while Don Carlos sings along until the Dub part. More Don Carlos, a full lyrical track of which the Dub was played at the start of the show and a classic from that era, in Discomix style. Johnny Osbourne and a Dub by Scientist, another favorite of the selector. Papa Tullo in Discomix style, with a little bit of vinyl trouble that's hardly noticeable.

Josey Wales' "Guiding Star", a favorite of Iriginal Jah Roots band drummer Imro Fedor precedes two Yellowman tracks of which the one with the long name was a hit back in the days, a success for Yellowman as well as the Volcano label that was so strong in these days. The same goes for the Frankie Paul track that's there too, War Is In The Dance or Worries in the Dance.

Junior Murvin, Cultural Roots, John Holt, Triston Palma: they all had new releases back in the time to join the Rub a Dub sound. A sound that is often underestimated by folks who think that Reggae's His Story stopped at 1979.

To conclude, so that we'll not forget it: a classic duet by Fathead and Yellowman that gave the title to this show.

LISTEN TO THE SHOW

Radio Dubroom Extra features music which cannot be played on the Radio Dubroom podcast for legal copyright reasons. The shows cannot be downloaded. All tracks in this show (C) by artists and labels. This show (C) by Dubroom. The actual mix is hosted on www.mixcloud.com/dubroom and should be completely legal. For copyright issues visit http://support.mixcloud.com/customer/portal/topics/70420-listening/articles