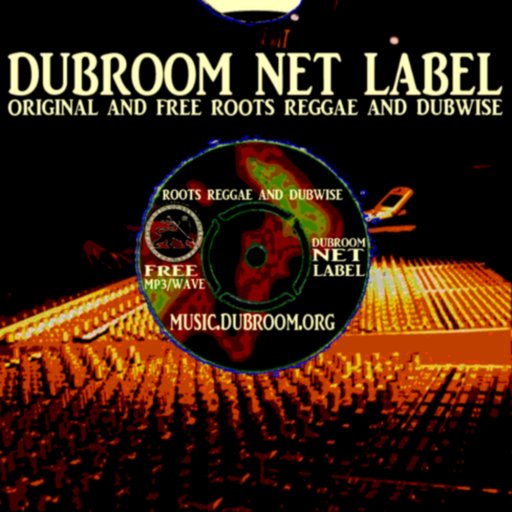 WWW, August 2014 - Sometimes, things require an explanation. Sometimes, you just want to know a little bit more. Sometimes, you're looking for something specific. That could just be the case with the Dubroom's very own Net Label. What's this all about, and how does the music get on this label? Messian Dread explains.

In the Dubroom's humble beginnings back in 1997, what we did was releasing music in the general MIDI format. You can still download them, and even remix them non-commercially for free at midi.dubroom.org. Then came the MP3 format and with that, the true golden years of MP3.com and it's subsequent demise.

After surviving the first decade of this 21st century, the Internet saw the rise of the Net Label phenomenon.

A label is basically an outlet for musical productions. This is the case with labels that provide buyable music, and this is the case with Net Labels even though the majority releases music for free and often even under Creative Commons copyright. Just being an artist or producer creating music does not necessarily lead to your music being heard, where a (Net) Label presents artists and music to reviewers and those online seeking for free and legal music to download.

The Dubroom caters to all of the above: you could say the the Dubroom is a very central website when it comes to getting free and legal high quality (DUB) Reggae Music. Hundreds of free albums and single tracks, often downloadable straight from the Dubroom. That's reviewed music alone, which is exactly the reason why the Dubroom Net Label was founded.

The Dubroom doesn't just review music. There is real music produced in the Dubroom Studio, which you can find on the pages of messiandread.dubroom.org, but there is also music which is not produced in our studio and yet we're able to release them. This is usually the result of some form of contact or request from the side of the Dubroom. Anyway, that's the reason why the Dubroom has a Net Label on top of it's reviews and studio productions.

We're also honored to be able to present a number of productions that have nothing to do with the Dubroom studio, Jah Roots or any of it's members. We're talking names like Prince Fatty, Dubcreator, Alpha and Omega and a very interesting compilation for Jah Billah.

In 2014, the Dubroom obtained licenses to use specific vocal works by well-known, legendary and otherwise very good, skilled and talented vocalists. Big names and big voices. The music that these vocalists (you can find them in our artist section) voice over, is produced in the Dubroom. Most of it, that is. We also obtained recordings and licenses to use stuff that is recorded in the legendary ARIWA Studio, where Mad Professor holds the scepter. This is all legal, fully licensed, and still offered to you free of charge.

From time to time, we receive requests by artists/producers to be included in the list of names at our Net Label. Perhaps, that's why you're here reading this.

This Net Label is most certainly open for inclusion of music, but not just any. Inclusion on this Label means a connection with the Dubroom, and not "just" a mention on the site in the form of a review. Inclusion on this Label also indicates a mutual urge to uplift the other. The Dubroom uplifts the artist, and the artist uplifts the Dubroom. And, as you know, uplifting goes further than "to promote", as we do with our reviews. To uplift means, to take it to a next (higher) level.

It's pretty hard, if not impossible to describe just what the uplifting would mean. It's basically something you just know, you simply feel it.

It goes further than an urge to promote your own musical works. The Dubroom Net Label should absolutely not be seen as a way of promoting certain artists, even though it can be a side-effect of inclusion. When we add music to our label, we feel that it uplifts the average quality of the catalogue rather than the other way around. At least, every addition should really be that, an addition.

It goes further than just wanting to promote the Dubroom as well. It has to do with the promotion of (DUB) Reggae as a whole, and (preferably) consciousness as more or less defined throughout the entire website. That means, no slackness and no shades of grey when it comes to legality. All the music on the Dubroom Net Label is licensed.

We're here to offer you free and legal music for your enjoyment or Sound System, music that uplifts the people. 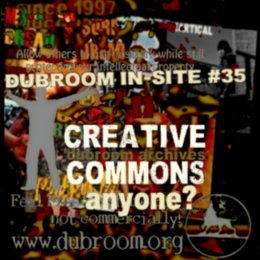 WWW, August 22 2014 - During the release of the album "Heavyweight Dubwise", there has been quite a bit of backstage activity in the Dubroom. It includes over 350 musical tracks, the complete Dubroom Midi File catalogue, and something called Creative Commons. This is Dubroom In-Site #35 with essential news and information for producers and YouTubers.

When the Dubroom started it's humble beginnings back in the year 1997, we're talking about an Internet without MP3. There was such a thing called "Real Audio", and yes we have been releasing music in that audio format. A track or two, three. It was "real audio" in the sense that it was really a sound, comparable to a very lo-fi 64Kbps MP3 file, perhaps worse than that.

We opted for the General Midi format and even though Midi has gone back to the studio for a long time now, midi.dubroom.org is still well visited and that's not just by people looking for recalling do times or Internet historians. No, not at all. Producers of music know to find midi.dubroom.org but now here is the catch: some have been using material they downloaded there, and didn't give any credit to the Dubroom when they released their work commercially.

Those who have been following the Dubroom these last years know all about Dub Step producer Skream and how he pressed play on the midi player in his studio, did a few things with "Rock The Nation In Dub" and released "Blue Eyez". His facebook page shows a pompous, self-righteous guy in a pompous, self righteous world.

Is it worth to go after such a guy? And, who's next?

No, there is a better way.

Of course these producers do not credit the Dubroom, because they do not want people to find out about the Midi Files. Too much exposure exposes their own lack of creativity and perhaps even lack of inspiration in the first place. Then, since most people who visit midi.dubroom.org are basic decent people respecting our copy right, they too will not spread the vibes.

That situation has now changed.

As of last August 16, all Iriginal Reggae Midi Files have been re-released. This time under a Creative Commons Copyright that give anyone the freedom to take whatever they like from the midi files and use it in their own production. Just credit the Dubroom and everything is OK! This even goes for commercial productions, even though we would like to be contacted and make it official so everyone knows you haven't been stealing.

That's not the only thing we'd like to announce, though.

These last two weeks, nearly all Dubroom releases from 1997 to 2011 have been uploaded to a special You Tube account called "The Dubroom Dread". We're talking Messian Dread, Sure Dread, Heartical, and the Iriginal Jah Roots band. We're talking 350 different tracks and counting! All these tracks have originally been released under Creative Commons and You Tube has this feature called "Remix This Video", so here we have a perfect combination.

Everyone with a YouTube account is now officially allowed to use any of our Creative Commons releases from the Dubroom Dread channel for their own video. Simply pick the track you like, click "Remix This Video" and off you go.

The channel features several play lists: per artist, or per format. You want a Dub with some vocals, or the contrary, you're looking for an all instrumental Dub? A Discomix, A One-Take Dub shot? You can find them by browsing the play lists.

The video's themselves contain the music and some extra information on the screen. Do not expect official video clips, these are released from the official Dubroom channel. This is material presented for use, even though you can of course click a play list and start listening as well.

WWW, August 17-22 2014 - This is a special Dubroom video release of the yet unreleased extended track voiced by Seamus called "Babylon System". A Dub of the track can be downloaded for free at the following link: http://music.dubroom.org/netalbums-heavyweightdubwise.htm

The video deals with the recent murder of a young black man called Michael Brown by a white police man. Another bredda killed dead. Babylon system crushing down.

Jah see and know, and told us so.