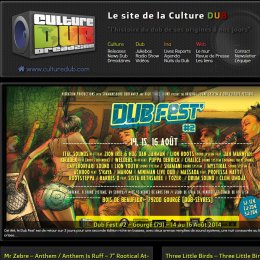 WWW, July 2014 - French speaking/reading? It's not everybody's ability but in days of Google Translate it is possible to check out a website even when you don't read the language. In this case, a website that does make you positively envious at those who don't need such a tool because of the wealth of information alone. Presenting CULTURE DUB presenting the dynamic French DUB/Reggae scene!

It's a label. It's a Radio Show. It's even a stricktly vinyl show that's recorded on video. It's an ongoing series on the history of DUB Music. It's filled with reviews of new releases and updates about upcoming live events. It's a website. It's in French. For the French speaking and based tribe of DUB. A very vibrant and active part of Europe when it comes to the Roots Dub Reggae scene. On the Internet for example, where French based Net Labels are no minority.

This is the situation where we find the website CULTURE DUB and the first thing that comes to mind is: heavyweight, both in quantity as well as quality. The webmaster is writing an ongoing sequel about l'histoire de Dub, for example. That's not to hard to translate, right? The title that is. You shouldn't judge a book by it's cover, but this looks pretty academic and therefore in-depth.