WWW, April 5 2008 - The gods of yesterday are the "aliens" of today. "Nordic Aliens", for example, that could very well be the real Aryans rather than white humans!

"Aryans", we know the word from Adolph Hitler's statements. We heard the word more than the phrase "The New Man" which Hitler would use to describe that very same "superman" he wanted to create.

Hitler wasn't really talking about "white folks" when he referred to the Master Race, he was referring to a specific race of Nephilim, unholy offspring between fallen angels and human women.

And Hitler wasn't the first one to utilize racism to make people hate each other while the real culprit is behind the scenes laughing.

WWW, March 2008 - WEAPONS OF MASS DUB VERSION is filled with anti-war Reggae and DUB Music, and created to serve as protest against the current war in the Middle East.

And there's more DUB in WEAPONS OF MASS DUB VERSION that WMD's in Iraq, that's a fact.

Reggae serves as a platform for artists who chant down Babylon as their way of living, for who truth is more important than the money they can earn if they lose the "rebellious" nature.

Even though the music itself is already "discovered" by the modern day musical Christopher Columbuses of the Music Industry who always seek to thrive on what is not theirs, the best Reggae remains to be made by Conscious people who have something to say.

WEAPONS OF MASS DUB VERSION shows, that the Conscious Factor has not left the realms of Dub and Reggae, but in fact has produced some of the most solid Reggae Music tracks, just because of the lyrics.

This is the kind of Podcast you play out loud to chant down Babylon one more time! 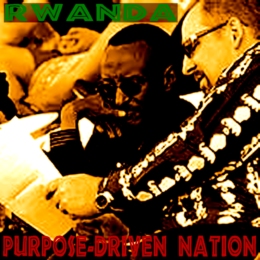 WWW, April 2008 - "We will not fail you", promises the leader of Rwanda to Rick Warren. The project to turn Rwanda into the world's very first "Purpose Driven Nation" takes another step as the country recently officially launched the "Fourty Days Of Purpose".

Not only has he succesfully introduced his new age "gospel" to millions of Christians world wide, he is also training 100's of 1000's of pastors to "transform" their churches into centers of what he calls a "Global Peace Plan".

Warren's Global Peace Plan states that the Churches have to become part of the United Nations and create a situation of world peace which is the requirement for Jesus Christ to return.

His philosophy is heavily based on pop-psychology and other forms of mind control, his view of the church is that it's part of a Church-And-State system, and he got everything from his "Christian" mentors, people like Robert Shuller who are exposed for the antichrists that they really are.

Transforming "Christianity" and "Churches" into better tools for Babylon System is not enough for Rick Warren. After all, his purpose is a "world peace" "so" that "Jesus Christ" will come to rule.

The nation of Rwanda is apparantly one of the first on the list.

For years, leaders have been initiating themselves into the doctrines of what has come to be called "Warrenism". Rupert Murdoch's pastor himself travels several times a year to the African nation to make sure that his project is working, and now it is time for the more official part of all of this.

In an official ceremony, the nation's leader officially announced how the nation would officially go in to "The Fourty Days of Purpose", basically a period of brainwashing people into becomming good robots for The Plan to unite the world for the comming antichrist.

President Kagame told his audience how Warren's "Global Peace Plan" had taken it's place in the country's official politicks and how he considered "The Fourty Days Of Purpose" to be the official launch of what is going to be "prosperity" for Rwanda.

He was part of that audience and knew himself to be sitting with the elite of the country. Politicians, for example. Sitting together with 200 leaders of "churches", who had been studying these last two years and were called "foot soldiers" by President Kagame, who was very serious in announcing the "transformation" his country would undergo during Warren's 40 day brainwash campaign.

President Kagame swore: "We Will Not Fail", in a referance to "The Fourty Days Of Purpose" in which he was about to throw his nation in.

Rwanda: Country With a Purpose - Kagame

Rwanda in the past existed with no purpose which resulted to a shameful history. now the country has chosen to live with a purpose for prosperity and faith, President Paul Kagame has said.

The President was speaking at a gathering that brought together thousands of Rwandan Christians during the launch of '40 Days of Purpose' at Amahoro National Stadium last evening.


The launch was blessed by among others, the influential evangelical preacher and author of the Purpose Driven Life, Rick Warren who was accompanied by his wife.

Kagame said, "we have lived in our history without a purpose and we can not afford that anymore, we have chosen to be a country with a purpose."

He added that three years ago, the same congregation met at the Stadium to launch the Global PEACE Plan, which Warren officially unveiled.

The initiative tackles five of the largest problems facing the world today namely spiritual darkness, lack of servant leaders around the world, poverty, disease, and ignorance.

"The Peace plan is a partnership between churches, public and private sectors under the driving force of Pastor Warren," Kagame said.

President Kagame said that since the launch of the Peace Plan, there had been great success from the initiative especially in the Western province where peace partners have worked closely with the Ministry of Health.

He called on other sectors in the country to replicate the Western province model. " more importantly all Rwandans should embrace this initiative," he added

He promised Warren that the 40 days of Purpose will not fail, saying that there was no better place to launch the initiative than in Rwanda.

"This comes at a critical stage in our country when we are undergoing transformation to prosperity of which other countries have taken for granted.

He told Rwandans that for the country to stand firm, it needed to have a church with faith, and firm private and public sectors.

Kagame also told the 200 pastors who had graduated in purpose driven life that they are the foot soldiers of transformation during the 40-day exercise. The pastors were drawn from different churches and are supposed to lead the 40 days of purpose initiative after completing a two year course.

Warren who is in the country for the 10th time in three years, talked about qualities of good leadership saying that seeking God's guidance makes a good leader.

He said that majority of the Rwanda churches have adopted the 40 days of purpose and the first phase of churches started implementing the initiative this last weekend.

"So far hundreds of churches in Rwanda have adopted this initiative which is so impressive," Warren said.

Speaking about his Global Peace Plan, Warren said that he was confident the plan would spread from Rwanda to all parts of the world, caring about those in need.

The colourful function which was characterized by gospel songs and prayers was attended by top government officials.