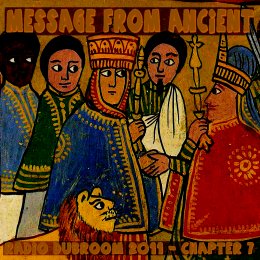 WWW, March 2011 - The message from ancient is almost 1 1/2 hour of Jamaican Rockers Reggae from the 1970's, with DJ's and Singers chanting down Babylon and singing Jah Praise: timeless truth on some really heavy duty drum and bass lines carefully mixed by the Founding Fathers of DUB Mixing and Reggae Music.
The show opens with a classic tune by Yabby You singing praises to Yesus Kristos, JAH Himself Who came down to save His children. The tracks also contains a warning for those that play with fire while Jah Jah soon come. More actual than ever before as I would say! Sylford Walker also comes with a warning because when Jah Jah come Judgment come along with Him.
The second part of the show is reserved for some of the best Jamaican toasters (Reggae DJ's) of the 1970's: Dr. Alimantado, I Roy, Tappa Zukie, U Brown and Trinity are there to deliver their message of Truth and Righteousness.
Third part comes in a stricktly, stricktly Dubwise style mixed by some of the Founding Fathers of DUB: King Tubby, of course, as well as Prince Jammy and Ernest Hoo-Kim who mixes a crucial riddim by Inner Circle (aka Fatman Riddim Section). Roots at the Control fe true!
Chapter 7 of Radio Dubroom 2011 ends with a selection of vocal tracks with their Dub version, some of them even with two Dubs: Junior Ross, Errol Holt and Yabby You are there to once again remind us of the Message of Ancient that you can find throughout the whole set.
Blessed Vibes!
PLAYLIST
ALL TRACKS COPYRIGHT BLOOD AND FIRE
01. King Tubby's - Jerusalem Dub
02. Yabby You - Walls of Jerusalem
03. Sylford Walker - Eternal Day (Discomix)
04. I Roy - Holy Satta
05. Tappa Zukie - Jah Is I Guiding Star
06. U Brown - Satta Dread
07. Dr. Alimantado - Mash it Up
08. Dr. Alimantado - Chant To Jah
09. Trinity - Tribal War
10. Trinity - Tribal Dub
11. King Tubby and Soul Syndicate - Tinmson Pen Dub
12. Gregory Isaacs - War Of The Stars
13. Prince Jammy's - Great Man Called Kenyatta
14. Inner Circle - Too Much War
15. Tappa Zukie - Jah Speak in Dub
16. Junior Ross - So Jah Jah Seh (Discomix)
17. Tappa Zukie - Way Over In Dub
18. Junior Ross - Send Me Over There (Discomix)
19. Tappa Zukie - Way Over In Dub
20. King Tubby's - Fire Dub
21. Yabby You - Fire In A Kingston
22. Errol Holt - Yes, Yes, Yes (Discomix)
DOWNLOAD