WWW, November 24 2008 - When I joined the "Christian Reggae Scene", it didn't take me long to find out it was basically a spiritual brothel where spiritual fornication of a specific kind was not only committed, but even cultivated.

The result of that cultivation is a thing we can see today in the form a "Gospel Reggae Industry" where "Gospel Dancehall" vocalists sing tunes how Jesus is going to give them bling-bling and conscious Rastas are being ridiculed as "paranoid conspiracy theorists".

Of course, I see very clearly just why I received that invitation, almost a decade ago, to join that group of spiritual fornicators. 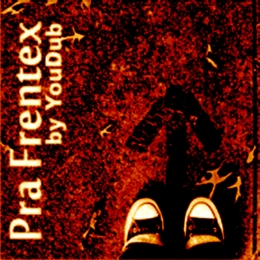 WWW, November 2008 - Just like Dancehall, DUB definitely takes it's own way inside and outside of Reggae Music. In Pra Frentex we Step It Up on that One Way Street called DUB and let the Drum and Bass take use to Heigher Heights.

WWW, November 2008 - Just like Dancehall, DUB definitely takes it's own way inside and outside of Reggae Music. In Pra Frentex we Step It Up on that One Way Street called DUB and let the Drum and Bass take use to Heigher Heights.

Here in the Dubroom, we often have seen the influence of DUB in what can loosely be called contemporary Digital Dance Music. Styles like House and Techno would not have been there, or would have sounded quite different.

We also see on a regular basis just what DUB as a discipline in itself is capable of. Instead of just serving as a source of inspiration for such highly popular styles in Dance Music, DUB is also continuing to develop into ever Heigher Heights.

Often crossing the realms of Reggae, too.

Or expanding them, if you will.

For DUB and Reggae are connected, arguably more than Dancehall. If only for the simple reason that the best music to create DUB with is still Reggae Music.

Just how DUB is developing, crossing or expanding the borders of Reggae, can be heard in Pra Frentex.

We hear music that represents a form of DUB which is played at parties where you can hear Techno and House in other rooms or halls. Music that still is Reggae, but definitely seeks the limits at times.