WWW, March 5 2009 - In six one-hour episodes, Mikey Dread takes us on a tour through Jamaica during the early 1980's. Not just that, he shows the history of Jamaican people and culture too!

Originally, the series (entitled "Deep Roots") was aired on the UK TV Channel 4 station, and the version that is available online isn't really of the highest quality, but this one is a must for every lover of Reggae Music.

We see Singers and Players of Instruments, Engineers, Producers, you name it. Long sessions and in-depth interviews, a wide variety of scenes and much more.

In the next 6 days, the Dubroom will feature all the episodes, together with a review. 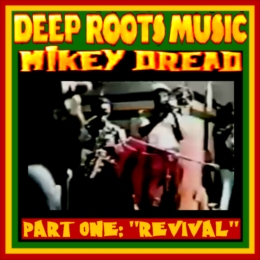 WWW, March 2009 - With the hand drums in close-up, the horns close by, here is the introduction to a 6 hour excursion to Jamaica in the year 1980. Your host is none other than Mikey Dread at the Controls!

WWW, March 2009 - Born in Jamaica, in 1939, Derrick Harriot is a singer and producer who has been actively participating in the development of Jamaican music longs before that music became Reggae.

WWW, March 2009 - With the hand drums in close-up, the horns close by, here is the introduction to a 6 hour excursion to Jamaica in the year 1980. Your host is none other than Mikey Dread at the Controls!

Part 1, entitled "Revival", takes us to the Roots of Reggae, which is directly related to slavery. The story of slavery, when Africans were taken from their homeland to work for the Babylonian colonizers, is explained. Drums were forbidden, torture was the rule: but in all this tribulation, the Africans did keep and develop their culture and dignity.

The enslavers, who claimed to be "Christian", looked down on the Africans. They kept their white religion for themselves, but in 1784 the first Black Church, called "The Ethiopian Baptist Church", was established. A significant event in the further development of Black Spirituality and Culture on Jamaica.

We're taken to what in the meantime has become a rich spectrum of Revival and other Spiritual Movements, all of them having their influence in shaping the Music that we love so much: Roots Reggae, Deep Roots Reggae.

Musically, Reggae has predecessors like Mento and Ska. These musical styles were as much connected with the Jamaican Spiritual heart-beat as Reggae is today. This connection becomes very clear in the long explanations and filmings of sessions.

It has to be clear, before we can continue to go into the Ghetto to meet the Skatalites, the band that had Studio One as their basis. Studio One, where most well-known Reggae artist have one or more times practiced their talents and skills.

As they talk and sing, it become clear that this is 1980. The Skatalites were already legends in Jamaica, as they were very much responsible for creating the rhythm and sound called Reggae some 15 years before that. Things had rapidly changed in that 15 years, and yet, some things stayed the same.

The Nyabinghy rhythm of the Rastafarians, for example. The percussionist starts to explain where he's coming from and plays the rhythm, singing over it...

Another influential group is Toots and the Maytalls, whose tune "Do The Reggay" is said to have given name to the Music, even though the spelling is -for obvious reasons- a bit different today. We see them in an old, old live performance, when Ska was still the music of the time.

Ska was heavily promoted by the first government of Jamaica after independence was declared, in order to promote the indigenous music from "Yard". Jimmy Cliff was another Super Star from that time. We see him too, in black and white film from the 1960's.

Just before the end, we fast forward to 1980 and meet up with Jimmy Riley, who was there back in the 1960's when Reggae came into existence. As he is singing "Poor Immigrants", he reflects on what was then already a Reggae History.

Part 1 of "Deep Roots" establishes a solid foundation for the five hours of essential Reggae History that are yet to come.