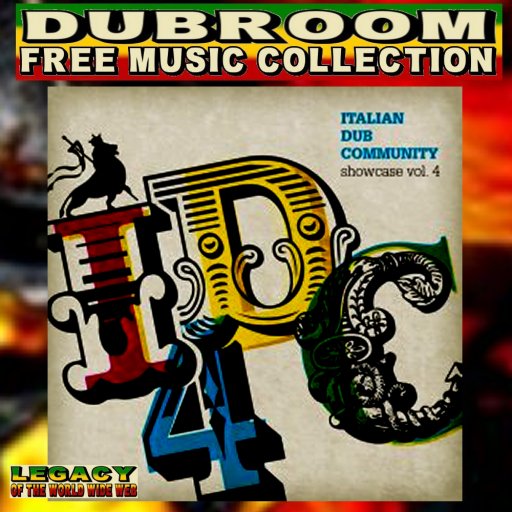 WWW, July 2012 - The fourth installment of the Italian DUB Community (IDC) Showcase series takes the musical vibe to another level, incorporating several elements of Dubstep and other Dub-derived styles. A well-appreciloved combination of (DUB) Roots and Electronica that contains some very interesting and recommended material for the Worldwide and Online DUB Massive.

In many ways, Chapter 4 goes into a different direction compared to the previous three. There is less of the straight-up steppers riddims, and more electronica in the mixes. The result is a surprising excursion into the current digital technologies of which DUB certainly stood at the root. The IDC surely shows Roots and Culture to the contemporary DUB scene, in the broadest sense of the word DUB.

Just mentioning Jambassa's "Declaration of Indipendence": chilling out in a style that in part hints towards the vibes in Mad Professor's works with Massive Attack. This is one of the titles on the album that could be played by DJ's in just about any electronic set. Another interesting track worth to mention in this context is the contribution by The Imperial Sound Army: A very interesting and intelligent mix of DUB and Dubstep heartically voiced by singer Dan-I.

Less of the straight-up steppers riddims doesn't mean the album is void of them. Quite the contrary: take the massive, heartical Vocal and DUB by Moa Anbessa for example. "Education" is one of these tunes that will be played on many sounds and broadcasts for years to come.

The Natural DUB Cluster comes with a heavyweight, up-tempo electronic steppers called "Movin'". Can't ignore this one either, if only for the militancy. A monotonous bassline just playing on the whole count, melting together with the bassdrum. Foundation for a minimalistic track which you need to play several times before discerning the distorted spoken words.

There's also stuff for people who love their basic Reggae and are not neccesarily into (militant) Steppers or excursions into wherever, who are just longing for a good drum and bassline. Filomuzik, a new name in the series, comes with a title U.N.I.T.Y. and should be mentioned at this place. Fat bass in an upfull Rub a Dub riddim, mixed in Old Skool style. Wicked DUB Division's "Sound Of A Rebel" is another one in the same style.

Conclusion: IDC Showcase Chapter 4 is definitely no album that should be listened to just once in order to get the vibes, in order to discover the nine different angles covered in eighteen mixes. There is just too much in there. It's not more of the same even though that would in itself be very much appreciloved and even though it is building upon the three previous chapters.

It's something that makes you wonder what will happen in the next Chapter, like in a good book!