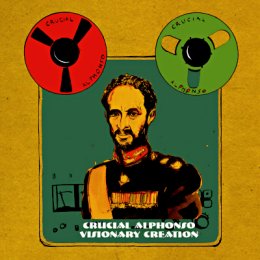 WWW, September 2014 - True Original Sound System Style: six titles all with two versions. Pumping steppers riddims, some played by the mighty King Earthquake (UK) and all created in Crucial Alphonso's Belgian Studio. When you like your digital, when you like your steppers, when you need your bass, just download this free release by that Maltese DUB KEY Net Label.

Crucial Alphonso grew up with Reggae. His father a Reggae DJ, his own voicing at Sound Systems and ability to create his own electronic devices, it was only a matter of time before he would start releasing his own production. As said, as done. Twelve outstanding pieces of digital niceness that yuou can play soft but preferable loud with a lot of bass.