WWW, May 24 2010 - Greetings, welcome to another edition of Dubroom Weekly and thank you for your interest! We got some nice stuff for the collector of Free and legal (DUB) Reggae MP3 Files and. Hopefully, the first episode of the brand new Radio Dubroom Podcast will be a part of that as well!

After a couple of weeks to set thing up, I'm really happy to be able to announce the very first episode of the -hopefully- brand new series of Radio Dubroom podcasts. It's just a humble beginnings but I hope that throughouut time things will crystalize. For now, I just give thanks for this brand new thing of which I hope to make new episodes on a regular basis, preferably weekly...

THE OLD, THE NOW AND THE NEW 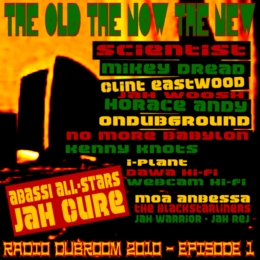 WWW, May 2010 - In the very first episode of the brand new Radio Dubroom Podcast, we can listen to a selection of fine (DUB) Reggae Music tracks, of which with the exception four titles all were available for free and legal download at mp3.dubroom.org.
The show opens up with 6 Jamaican (DUB) Reggae tracks from the 1970's-1980's. After the introduction Dub, a discomix by Mikey Dread, followed by two DJ tracks and a Dub. That was The Old.
We make a quick trip in both time and place, to land in the European continent where there is a large French movement involved in orthodox Roots Rock (DUB) Reggae. Centered around the beautiful Bring JAH Love by Kenny Knots and the French No More Babylon, we get a large taste of French DUB and Roots.
Via Moa Anbessa with a heartical, contemporary Roots rendering of the ancient Psalm 63, we cross the channel over to the UK where we find JAH Warrior with a Real DUB from Conscious Sounds Studio, JAH Rej from JAH Works UK and The Blackstarliners.
The last three titles are reserved for new releases: One title in two versions by the Abassi All-Stars and JAH Cure's soulful, spiritual response to the current tribulation in which many Jamaicans find themselves these days, as covered in the Dubroom Message Boards.
PLAYLIST
01. Scientist - Dub Ovation
02. Mikey Dread - Barber Saloon (Discomix)
03. Clint Eastwood - Whip Them Jah
04. Jah Woosh and Horace Andy - This Natty Allright
05. Jah Woosh and Horace Andy - This Natty Allright Dub
06. Mikey Dread - Operator's Choice Dub
07. Ondubground - Lola Dub (Part One)
08. Ondubground - Lola (Featuring J. Cotton, Bigga Ranx and B Ben Massa)
09. No More Babylon and Kenny Knots - Bring Jah Love (Discomix)
10. I-Plant - Shine (Dub Remix)
11. Dawa Hi-Fi - Smokee Riddim
12. Webcam Hi-Fi - Spiritual Livin'
13. Moa Anbessa - Psalm 63
14. The Blackstarliners - Roaring Lion
15. Jah Warrior - Real Dub
16. Jah Rej - Cool Runnings Dub
17. Abbassi All-Stars meet Marta - Forward (Dub)
18. Abbassi All-Stars meet Marta - Forward (Vocal)
19. Jah Cure - Save Yourself