WWW, March 17 2009 - No, the War Against Reggae did not stop when Bob Marley was killed and Jamaica subsequently flooded with cokane as part of Ronald Reagan's fraudulent "War On Drugs".

It wasn't over, when many corrupted because of money temptations and others got killed or silenced in other ways.

It wasn't over, after Dancehall Artists signed the "Reggae Compassion Act" where Babylonians dared to define "One Love" on top of several known artist's signatures.

It won't be over, not until Babylon has stopped squatting Jah Creation because Jah Himself will come to establish His Kingdom.

Until that time, we have to face tribulation in one way or another.

WWW, March 2009 - With the extra syndrums on top of the original Studio One recording, this classic track has it all and more. Horn blowers, a crucial rendering of some crucial lyrics, and even a DUB to complete the experience. 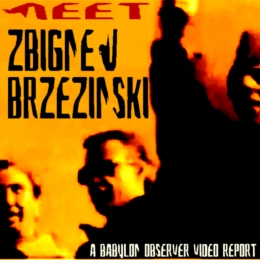 And now, Zbignew Brzezinski is back.

And now, Zbignew Brzezinski is back.

He is an advisor to Obama, and he knows all about the Afghanistan which is the target of Obama's bombs. Why? Well, he went to Pakistan and told the Taliban to get their land because "God is on your side".

Check the video and see it for yourself.