WWW, October 19 2008 - Do we have the courage to admit for ourselves, for Jah, for others even, that we ourselves are initiated, enslaved, identifying ourselves with what Babylon tells us that we are?

Do we realize that we are created to be free and therefore when we say we want to "be ourselves", this doesn't mean that we can continue to be enslaved, not free?

Obviously, I cannot go further than asking this question. I can only answer it for myself, to the best of my own ability.

And if it helps you, my answer is "yes". 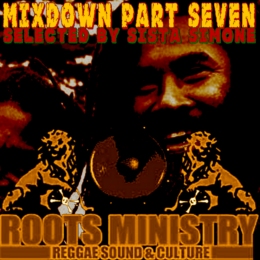 WWW, October 2008 - Selecting and mixing is an art requiring skills and talents. Germany based Sound System ROOTS MINISTRY masters the arts and comes back once again to serve the needs of Roots Lovers all over the world. 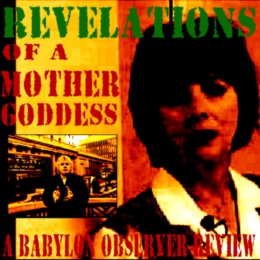 WWW, October 2008 - Selecting and mixing is an art requiring skills and talents. Germany based Sound System ROOTS MINISTRY masters the arts and comes back once again to serve the needs of Roots Lovers all over the world.

In the meantime, we've reached the seventh episode in the Roots Ministry Mix Down series. Selected and mixed by Sista Simone, here is another hour filled with Vocals, Dubs and DJ tracks. Everything skillfully mixed together in different and surprising ways, accompanied by crucial sirens and jingles.

The show has a clear emphasis on Jamaican Rockers and Rub a Dub from the 1970's/1980's, but isn't limited to that era and time. After a while, we go into UK DUB and Roots by Jah Shaka and others.

Consciousness galore: this show will warm up the hearts and souls of the Roots People all over the world who need Roots Music as part of spiritual nourishment.

REVELATIONS OF A MOTHER GODDESS

Take it with a grain of salt, if you will, but don't reject everything beforehand. In "Revelations of a Mother Goddess", we are being confronted with information provided to us by a woman called "Arizona Wilder", as she is introduced and interviewed by British author and researcher David Icke.

Arizona claims to have been born in a family that wanted her for just one reason: she had to grow up and become a high priest in a religion that is secretly practiced by the World Elite. Through the technique of ritual abuse she became a programmed priest who would perform rituals at several places which would basically consist out of the calling up of very strong demons and the killing of humans.

She goes further. As she was part of the rituals, she say many of the participants "shape-shift". She saw them change into a reptilian figure which gave her -and David Icke- the idea that in fact these are not people but a different kind of species. The possibility of demonic possession isn't considered in the video, even though all the elements are provided to come to that conclusion.

Here comes the grain of salt.

You don't need that grain of salt, though, to realize that yes indeed the World Elite is involved in such a satanic religion which involves Babylonian, occultic rituals. Bohemian Grove, to mention one other piece of evidence, in the woods of California, is the place for such rituals which have been secretly video-taped by Alex Jones. The second Psalm of the Bible also speaks kinda clear about it.

Before the actual interview starts in this -almost- three hour video, David Icke takes us straight into the City of London. The inner part, where you can find one office after another deadicated to the New World Order: the Tavistock Mind Control Institute for example. In itself a very interesting part which can be seen even without watching the actual interview.

Arizona Wilder is obviously a traumatized woman, who is not faking it. She speaks about things that are hard to believe, but when you listen close you will see that much of that is her own speculation. When she speaks about facts, they do not have to be interpretated like David Icke and Arizona Wilder seem to do. But they should at least be taken notice of.