WWW, February 15 2008 - A very strange remark by the Most High JAH, to describe the final step of Babylon Shitstem with the words "They Will Mingle Themselves With The Seed Of Men"...

Who are "they" anyway?

Most Bible scholars will not look any further than describing "ten kings", represented by the ten toes of the statue portrayed in the Book of Daniel.

However, since we know that the aim of Mystery Babylon is to bring back the Days of Noah, we have more than a little clue as to the identity of those that will mingle themselves with the seed of men.

For there are those among the "kings and rulers" that simply aren't "of the seed of men"! 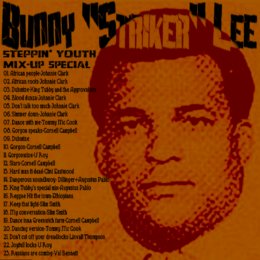 WWW, February 2008 - Steppin' Youth brings us an interesting 45 minutes of strictly Bunny Lee productions with a well appriciloved emphasis on his 1970's works with Johnnie Clarke, King Tubby and the Aggrovators (Sly and Robbie).

Bunny Lee started working in the Jamaican Recording Industry from before there was a mention of the music called Reggae. After initially starting with Duke Reid's Sound System, he quickly went on to produce (read: finance) releases himself.

It was under the financial supervision of Edward O' Sullivan "Bunny" Lee that Reggae Drummer Carlos "Santa" Davis developed the now classic Flying Cymbal sound (with an open hi-hat on the 2nd and 4th count of every bar) in the mid 1970's.

Steppin' Youths tribute to this excellent producer focuses especially on the works that Bunny Lee did in this very same era of the mid 1970's. The time wherein singers like Johnny Clarke and Cornell Campbell sang their Conscious lyrics over the militant riddims played by Channel One Studio's House Band the Aggrovators.

Not just singers, though...

The Podcast features some very catchy DJ tracks by U Roy, Dillinger and others. Of course, King Tubby is there too with a number of heavyweight DUB version.