WWW, May 27 2008 - When Nimrod started his project, he named it Bab-El, which means as much as Gate to the gods or Gate to God.

Translated from his language, that is.

You could therefore say, that Babylon presents herself as the way to God. That is, again, when you listen to her in her own language.

So in order to know that she claims to be the gate to God, you must first learn to speak her language, or at least be able to understand it.

Which is a thing that most of us do!

Jamaican vocalist Zacheous Jackson knows how to ride a riddim. All sorts and kinds of riddims, that is.
It doesn't matter whether they're created by the better online (DUB) Reggae producer or by others, Zacheous will add more than just a conscious vibe to the tracks he puts his voice over! 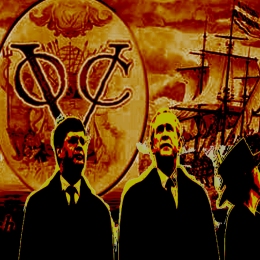 WWW, May 2008 - A cartoonist is arrested by ten policemen and held for 30 hours. And while the prime minister is off to visit George Bush and attend the upcoming Bilderberger Conference, the minister of defense says dropping cluster bombs on Afghani people is ok.

Political Christianity, also known as Dominionism, shows a very ugly face in the Netherlands. A report.

Jamaican vocalist Zacheous Jackson knows how to ride a riddim. All sorts and kinds of riddims, that is.

It doesn't matter whether they're created by the better online (DUB) Reggae producer or by others, Zacheous will add more than just a conscious vibe to the tracks he puts his voice over!

WWW, May 2008 - A cartoonist is arrested by ten policemen and held for 30 hours. And while the prime minister is off to visit George Bush and attend the upcoming Bilderberger Conference, the minister of defense says dropping cluster bombs on Afghani people is ok.

Political Christianity, also known as Dominionism, shows a very ugly face in the Netherlands. A report.

Jesus Christ, believed to be the Divine Creator Himself, declared that His Kingdom was not part of "this world", not part of Babylon System. The religious police had Him arrested and crucified to death, and persecuted His followers (called: Christians) for centuries to come.

Christians were taken to the arena's where they suffered torture until death as part of an entertaining program of the Roman government. A practice that lasted until the Roman Emperor Constantine "legalized" the believe of those that named themselves after the Divine Saviour in Whom they had put their trust.

The birth of "Christianity" was a fact. "Christianity", as in: a religion which plays it's role in the Church-And-State-System until this very day.

Babylon System is a fact, and those who believe that the countless of Rastafarian lyrics in Reggae Music are merely rhetoric have never taken a look at the footnotes provided by these lyrics.

We try to provide some of these footnotes by reporting how Babylon System is identifying herself to those who have eyes to see, and part of that is by reporting on noteworthy events or "developments".

Last month, we reported on the fact that the African country Rwanda had officially turned into the first "Purpose Driven Nation" as the results of a political process by an American mega-church that (cl)aims to establish "world peace" in order to provoke the return of "Jesus Christ".

Thirteen months ago, we reported on the (then) new administration of the Netherlands. A coalition of three parties, where two out of three have a "C" in their name. That "C" is the first letter of the word "Christian".

In just over a year later, we can see where Christian Dominionism in the Netherlands leads to, and the fact that the administration has a historically low approval rate among the Dutch population shows that the self proclaimed "Christian" ministers are doing a good job in putting the Name of the Divine Saviour to shame.

It's not new: after all, the Dutch were (among) the most active in colonialization and slave trade during the so-called Golden Age and it was all done under the approval of an administration that claimed to be "Christian" as well.

Just in case you might wonder what "that" has to do with any current administration, let's quote prime minister Jan Peter Balkenende in one of his speeches in the Dutch parliament. In a truly sickening piece of rhetoric, he said:

"Let's say: The Netherlands Can Do It Again. That VOC Mentality!" (MP3, DUTCH)

The VOC, or Verenigde Oost-Indische Compagnie, was pre-runner of the company which owned the slave ships that brought the African people to the plantations on the so-called New World.

Back to early 2007. In the Netherlands, the current administration was still in the make. The top negotiator for the Christian Democrat party, now minister of foreign affairs, had just attended the previous Bilderberger conference. The negotiations, by the way, took place in a Bilderberger Hotel somewhere in the north of the Netherlands.

Fast forward to May 2008, when prime minister Jan Peter Balkenende is getting ready to visit George W. Bush in the White House, and to attend the 2008 Bilderberger Conference which will be held in Washington DC, too. (LINK)

Balkenende and Bush have a lot in common.

And this is how they do it.

Recently, a Dutch cartoonist was visited by ten policemen. They searched his house, and after intimidating the cartoonist (who works anonymously) with the publication of his name because what they were about to do, they arrested him.

Thirty hours in a police cell followed. A wide outrage throughout all spectrums of the Dutch population followed too, with the exception of certain religious groups.

These religious groups are increasingly imposing their religious perspectives on just about everything that takes place in the public domain. They want state laws against "blasphemy" to increase in strength at the cost of freedom of speech, and they have the government on their side.

After all, these religious groups are also responsible for the vast majority of votes that went to the three parties that form the current coalition: the Dutch Labor Party, the Christian Democrats and the Union of Christians.

And so, the minister of justice is known to favor a system of laws that limits freedom of speech in favor of religion. Of course, he's also part of the "Christians" which shows in the motivations for the political arrest of the cartoonist, because it has everything to do with religion.

The "Christians" also produced a brand new department, and now there is the Dutch minister of "Youth and Family". He told the Dutch population, that women had to give birth to 2.1 children and should breast-feed them, too. He has some nice ideas about putting youths in prisons as well, by the way.

The minister of defense is also part of the "Christians". Recently, he decided that cluster bombs are a good way to keep the people of Afghanistan down as the Dutch continue to do their part in imposing the New World Order on the country.

Media reported that the Netherlands has much more people "working" in Afghanistan than the official records claim, by the way. The parliament isn't truthfully informed, which can be considered noteworthy because the minister of defense claims to be a follower of Jesus Christ.

In the name of this "Jesus Christ", Babylon has been traumatizing millions and millions of people throughout history, right until this today. Her VOC Mentality is responsible for the African Holocaust and colonialization that led to the current "New World Order".

When the Dutch prime minister referred to that VOC Mentality as a description of his political ideology, he identified himself and his administration perfectly.

The self-proclaimed "Christians" in his group of ministers are increasingly showing just which "Jesus Christ" it is they are serving, and it's not the Divine Lord God and Saviour Who came to die for the sins of mankind!

This "Jesus Christ" is worshipped in the many churches who know themselves to be part of a Church-And-State system, mentioned in the many laws of the so-called "Judeo-Christian Civilization", and foretold by the Real Jesus Christ Who warned for a "False Christ Coming In My Name"...
No comments: