WWW, November 20 2008 - After discovering how key-figures in the Christian Reggae Scene were nothing but wolves in sheep's clothing, I discovered where I had put myself in to.

It's one thing to join a local church where most people don't know anything about Reggae and Rastafari than what the mainstream media is telling them, this and that confirmed by wolves who pretend to be Rasta but are something completely different.

It's another thing to join a group of people who wear dreadlocks, listen to and play Reggae Music while singing praises to Jah, only to find out that they are perpetuating that false image of Rastafari just because they get a financial benefit out of that.

WWW, November 2008 - He works in Switzerland, Italy and Germany as an acclaimed Techno/House DJ. Just what would he select for 1 hours and 40 minutes of Dub, Roots and (other) Reggae?

The result may surprise you. 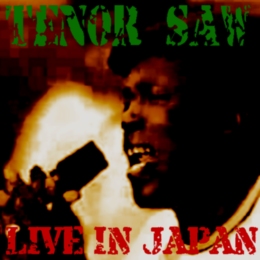 WWW, November 2008 - Reggae is definitely "Big In Japan" and it has been so for quite a while now, as this 1980's performance by Rub a Dub singer Tenor Saw shows.

WWW, November 2008 - He works in Switzerland, Italy and Germany as an acclaimed Techno/House DJ. Just what would he select for 1 hours and 40 minutes of Dub, Roots and (other) Reggae?

The result may surprise you.

DUB has been more than influential in the eventual creation of electronic Dance music: a thing you can read on many Dubroom pages. Ever since King Tubby cultivated the skill of mixing into a work of Art, people have been developing their own style over the concept.

Listen to certain UK DUB, and you will hear a style that many Reggae fans will not even (want to) recognize as a form of Reggae. Add to that, a lot of Reggae fans have a lot of dislike for contemporary digital music.

On the other hand, we do find that a lot of House/Techno producers and DJ's will know all too well just where their music is (partly) coming from. A lot of them have a love for Reggae, and especially DUB.

One of these DJ's is DJ I-smash, aka Psysmael. He works for Swiss radio, organizes festivals and is a wanted guest on parties in Switzerland, Italy and Germany. He can tell you all about electronic music and knows how to spin a few records.

In this mix, however, he doesn't "go techno". Quite the contrary, actually. In one hour and forty minutes he shares some of his (DUB) Reggae favorites. A look at the playlist might surprise you.

The music is mixed one track after the other, sometimes with a little effect but mostly just a no-nonsense non-stop mix of some of the most heartical DUBS and other Reggae out there.

DOWNLOAD BROADCAST (MP3)
MORE FROM THIS BROADCASTER
2 comments: Link(s) to this Message

WWW, November 2008 - Reggae is definitely "Big In Japan" and it has been so for quite a while now, as this 1980's performance by Rub a Dub singer Tenor Saw shows.


The video opens with Tenor Saw saying some nice things to the public, after which we go straight into the performance of two tracks, of which the second one ("No Work On Sunday") is one of the best known songs by the Rub a Dub singer.

The video was shot somewhere in the 1980's, when Reggae Times were definitely changing.

Together with singers like Barrington Levy, Cocoa Tea and others, Tenor Saw was part of a new generation of singers after Rockers Music had slowly changed into what we now call early Dancehall or Rub a Dub.