WWW, August 1 2008 - It's not easy to discover that we are all initiated into the mystery, trained to think that what Babylon says is the truth and so on.

It's not easy to know that what you thought to be Jah works, turns out to be yet another branch of the shitstem that started in the ancient times when Nimrod failed to open the bottomless pit by building a tower over it.

I invite each and everyone who reads this, to participate in debates and reasonings about this topic for the times to come. On the Dubroom Message Boards, for example.

Let's step out of Babylon, let's reason about it. 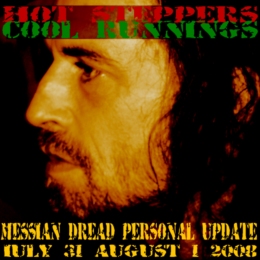 WWW, July/August 2008 - Nobody has more than 24 hours in a day and seven days in a week. And so, your's truly has to realize this too after a failed attempt to simply ignore this basic fact of life. The result is, that I have to stop updating the website for a while to come.

Read all about it in this special personal update. WWW, August 1 2008 - Exclusively on the REGGAEDUBWISE.com Website, one of the hottest places for the online artist to release their music, Dubroom Visitors can now download the album for free.

Check out the Messian Dread music page, download what you want for free, and please leave a comment or two.

The Dubroom isn't update daily in this time. But that doesn't mean there's nothing going on!

WWW, July/August 2008 - Nobody has more than 24 hours in a day and seven days in a week. And so, your's truly has to realize this too after a failed attempt to simply ignore this basic fact of life. The result is, that I have to stop updating the website for a while to come.

Read all about it in this special personal update.

I was already slowing down on updates, but now I am going to slow down even more. The reason being, that I simply can't do all the things that I am currently doing and it has grown over my head right now.

I wake up in the morning, and basically have to deal with a lot of things before I go to sleep again. But this isn't really possible at the moment, because I simply do not have the energy and the time.

I have 100's of unread e-mails, 10's of riddims to mix and sing, a long list of yet-to-review-material, books to write and so on and so forth. A situation which comes into existance as the result of the fact that I do not have the energy, sometimes not even to go out of my house.

Well, I don't wanna say too much in public about everything. Got people to protect and thing. But I am in a phase in my life that is between situations. I might very well end in a different country from where I will work further, but that is not my first option. Those who know me a bit more personal know what I am talking about, but I remain to be very very reluctant in sharing private stuf on public places so to speak.

However, this private situation does affect/effect (i do not know the right word right now) my public works too and it will affect/effect more as time goes by, at least for the coming months.

Basically, I do not know where I will be in a few weeks from now and that situation will not change fore these upcoming months. I tried very hard to work ahead in time so that my private runnings would not negatively affect/effect (yeah, it must be affect) those who like to read the new reviews and columns and so on, but i must admit: I can't do it cause I don't have the energy.

In the end, as said, I am in between two situations. The situation I expect to be in after having been living thought this terrible phase, will help me siginificantly in producing more stuff, but until that time I am in a situation wherein certain things take all my attention.

Please pray for me and people around me who are also involved, because we truly need Jah Guidance. I notice that we are attacked a lot, where in the same time we're fighting and struggling for the well-being of certain people who have been suffering all their lifes.

I'll try to visit the Message Boards daily, I will also keep you posted as best as I can, I'm not planning to go off-line and I know that after this situation I will have a lot to share.
4 comments: Link(s) to this Message

Email ThisBlogThis!Share to TwitterShare to FacebookShare to Pinterest
Topic(s): From the Webmaster, Messian Dread - Spiritual

This is the 7th track of my album "Showcase", and also the fastest one.

Believe it or not, in 2 minutes and 48 seconds there full lyrics and full Dub too. That must be a fast track, and sure it is. The speed is around 180 BPM, easily leaving many so-called fast tracks behind.

It's a joyous track too, as you can see by reading the lyrics. A true song of celebration!

He's our King now
Yes, He's the Lord now
The conquering Lion
Of the tribe of Judah

This is the 6th track of my album "Showcase".

There's real play on real violins, put through several layers of effects, and definitely not playing something traditional. The bass goes through some heavy filtering as well.

What are you going to say
When He'll ask you

"Did you give Me food
When I was hungry?"

"Did you give Me water
When I was thirsty?"

"Did you visit Me
when I was in a prison?"