The Mad Professor (Dubroom Artist Review And Much More) 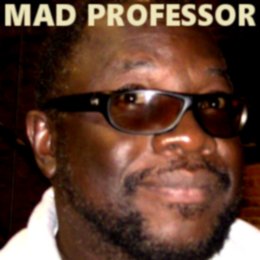 WWW, July 2014 - He is definitely one of the founding fathers of (UK) DUB and there is so much more that can be attributed to the works of Neil Fraser better known as The Mad Professor. From his London-based ARIWA Studio's to the world (wide web), it's impossible to count the works that this genius has released throughout the decades. The Dubroom's rather large number of reviews of Mad Professor's albums covers only a small portion of his work. A -rather personal- review by the Dubroom editor.

When he was a young child, he had more than an average interest in electronic devices. Perhaps it came through an interest he had, as he reportedly asked his mother who that little man in the radio actually was. Whatever it was, a strong determination and even more efforts led him to start his own recording studio in his home in London, where he recorded the Punk band Ruts DC and also started recording Reggae music.

Gradually, he became known and this got a real boost with the introduction of his now standard listening material for anyone even remotely into DUB and far beyond that: the DUB ME CRAZY series. Almost single-handedly, he took what was then (early 1980's) a fading trend in Jamaica and popularized it in the UK, Europe and the rest of the planet eventually. The creativity and, yes, without apology, genius mind of the Mad Professor was captured in these early releases and has never disappointed throughout the decades that followed.

It was during these days, that yours truly as a teenager had discovered the sound of DUB and after buying several chapters of the DUB ME CRAZY series phoned the number that was printed on the record sleeves. The Mad Professor took like half an hour, just to talk with this Dutch teenager that was "dubbed crazy". A memory that is precious and a half hour that turned out decisive.

Good vibes and always a place for known and unknown musicians and vocalists. Back in the days of MP3.com, several artists had a Dub of their music mixed by the Mad Professor. In the same time, he recorded Reggae Greats like Yabby You and Michael Prophet and created more essential Dub listening like New Decade of DUB with JAH Shaka.

Legendary for his DUB, another side of Mad Professor is his many Lovers' Rock releases. Lover's Rock is a very sweet, silky form of Reggae to which the UK seems to have some kind of signature and ARIWA plays -just like with that other trademark UK DUB- a central role. Usually, slackness is far away with Lovers' Rock and it's absolutely gone with the ROOTS DAUGHTERS that Mad Professor recorded and released. His recordings with singers like AISHA have reached classic status.

massive attack and the orb

ARIWA has not just recorded Reggae Music of the highest kind. Mad Professor has made a rather classic remake of Massive Attack's album No Protection, the ORB used his recordings with AISHA, and that's just two examples from the 1990's.

He got an enormous blow when it turned out that in spite of the good and necessary vibrations produced in Ariwa studio, some wicked person(s) decided to become a thief in the night and robbed everything. A wicked, wicked thing indeed which too not just a lot of time from Mad Professor and his Ariwa crew. Fortunately he regained his desire to share his music with the rest of mankind and we are now obviously at the point where ARIWA is the name for one of the essential sounds of Roots Reggae that is present in this time.

With the rise of the computer and other digital technology came the rise of computer-based music. After the initial time it took to overcome prejudice, computer-based music is now considered to be equal to that which is not directly programmed into a Pentium or what have you. Mad Professor released the second volume of "Reel To Reel Reggae", an excellent sample series for producers which is purchased, reviewed and used by the Dubroom.

Only a short period after Reel To Reel Reggae Volume Two was released and reviewed by the Dubroom, this website released a three-track EP with extended Dub created directly with Mad Professor's Sample Pack. A tribute called "Reel To Real Dubwise", which can be downloaded for free from the Dubroom and a variety of Online Music Distributors like LAST.fm, REVERBNATION.com, and VERSIONIST.net.

It is not so difficult to find information and music by the Mad Professor on the Internet. Take YouTube, where it is rather easy to find several video's where he performs live or gives interviews. Even tutorials, when you look a bit deeper. It's not so hard to take a listen, for example at ARIWA's Channel At Youtube or straight from the ARIWA website. 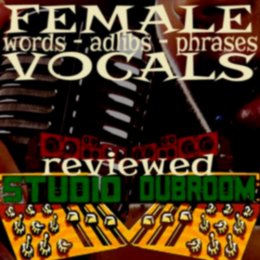 WWW, July 2014 - They have absolutely nothing to do with (DUB) Reggae as far as the online information gathered for this review has shown, but that doesn't really mean anything as far as (DUB) Reggae goes. A little cryptic perhaps, but nevertheless quite accurate when it comes to the three free female vocal packs reviewed in this article.

When King Tubby started to develop the Art of DUB, he started a technique that would be incorporated in just about every electronic musical genre you can think of, from Hip Hop to EDM. A few styles like Dubstep or Drum 'n' Bass even have Reggae phrases incorporated in their names. This mere fact alone completely justifies and explains why it could be interesting for your online (DUB) Reggae producer to browse a little bit through sample sites aimed at producers of EDM.

One aspect of Electronic Dance Music is the use of female vocals, very similar to the way vocals are used in Dub: lyrics, words, lines and adlibs drop in and out at strategic moments in the mix. This opens up a door of possibilities for the producer of DUB and even your non-DUB Reggae, because the availability of vocal packs for EDM producers is pretty wide.

For this review, we take a look at three different female vocal packs. The packs can be downloaded for free and they include a license for use in your productions, even commercial releases are possible. One nasty point: one of the packs can only be downloaded by registered members of Facebook but then you could get a friend who is registered at that website to do it for you.

First, there are two different packs containing the talented and skilled voice of UK based singer MANDY EDGE. They are available for free download at the SAMPLE RADAR website, you can find the first pack carrying 426 mB weight here, and the second one (237 mB) can be downloaded from this page. Then there is a free Vocal sample pack from UK based Dubstep Singer/Producer AIVA, which you can get after liking her on Facebook. That's just very unfortunate for those of us who do not have a Facebook account but then, again, you could ask someone who does.

All three packs contain a really impressive set of vocal lines, phrases and adlibs. They also contain lines and phrases that you might not want to use: slackness is easy to extract but then, slackness is always an easy road. In the same time, slackness is such a  thing where a self-inflicted blind spot usually functions very well. In fact, such a blind spot in necessary for all conscious artists wherever they perform or produce so let's take-this-truth-to-be-self-evident.

The samples come with information about pitch and BPM included in the filenames and folders, some are dry and others come with effects. The effected samples can easily be incorporated in an already existing tracks you might have made, the influence of DUB is not just undeniable present, these are dubbed vocals.

When used with care and respect for the singers, the way it should be done anywhere and everywhere, are -literary- priceless additions to your sound library. They can add an extra dimension to your track(s), and -depending on your creativity- that extra dimension does not have to be a "techno vibe" or something like that.

Just listen to the following 30 seconds of so with a Dubroom riddim and two vocal lines from the Sample Radar packs:

That's just two lines out of really hundreds that you can pick and insert. Creative minds will probably hear their own riddim behind it. Or take this track featuring two lines taken from AIVA's pack (among other things described here):

You can even say that just these two lines give a very special and atmospheric elements to the riddim, even an identifiable element in the sense that the lines keep ringing in your head after the track is done.

Three excellent vocal packs, well, more than excellent. These are very talented and skilled singers that control their voice in an impressive way. When done respectfully, the samples can bring your riddim(s) further without dragging everything into slackness or other evidently cheap abuse of the female part of our human race.