WWW, February 20 2009 - These last days I have been working like crazy to get the new Dubroom Message Boards up and running. It is a work that brings mixed emotions.

I had to change links in thousands of pages on the Dubroom website, and I am still not completely finished with this. However, the MP3 reviews and Video Reviews should all link to the new boards.

As I am writing this, the old Message Boards on xsorbit are still off-line. I don't even know if they ever will be online again, but I truly hope so. It's just too sad, that we had to make a move.

On the other hand, the new boards have many more possibilities for participants and for the administrator (that would be me). Especially the possibility to embed YouTube video's in posting is a thing that I very much like. 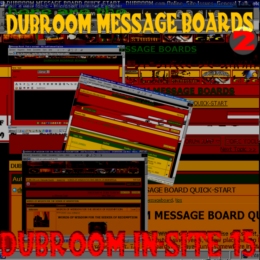 WWW, February 2009 - The smooth Reggae by the lead singer of UB40 will not appeal to everybody, but definitely has a place in the rich spectrum of styles within Reggae Music.

And he's willing to share a musical track for free!

HERE ARE THE DUBROOM MESSAGE BOARDS!

Actually, it's pretty sad. The Dubroom Message Boards have been hosted at Xsorbit for many, many years. Throughout that time, a complete archive of articles, reasonings and much more is produced.

At the moment this is written, the Xsorbit servers are still offline. Some of them are even parked at Go Daddy, indicating that they're soon gonna be offline "forever"... The Dubroom Messageboards at Xsorbit are now offline for almost a week.

It's not the first time, that Xsorbit went off-line. Searching the Dubroom for "xsorbit" reveals a history of server outages and other inconveniences. In 2004, an attempt was made to migrate the Message Boards to the Dubroom by using open PHP software, but that attempt failed when the software was hacked.

The enormous amount of information at the Xsorbit boards was the main reason why the Dubroom Message Boards were maintained there, but frustration did grow. The frustration needed a trigger, the bucket needed just one drop, and that has happened last week.

Even though it is unclear as to whether the xsorbit boards will be online again, it should not surprise us when they will not be. But even if they will, the Dubroom Message Boards will no longer be hosted by the Xsorbit servers. An attempt will be made to put all the information into a giant PDF file, that's all.

The bills are paid until the middle of March, after which they will probably be deleted anyway. The subscription has been cancelled.

So, where are the Dubroom Messageboards?

Here are the Dubroom Messageboards!

A few days ago, new boards were created at the Yuku website. Yuku is the follow-up of ezboard, and has an enormous amount of features that were not on the xsorbit board. You can read all about it in the Quick Start manual.

Everything has to be built from the ground again, and it will take years before the new Message Boards will have content similar to that of the old one. But still, better to re-build than to mourn over the past.

I hope to see you soon in the new Dubroom Message Boards!