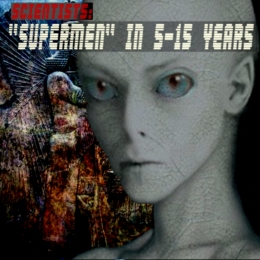 WWW, April 2008 - Recently, scientists declared the "magical" year 2012 to be the first of a decade wherein "supermen" will be jumping out of the test tubes in their laboratories.

In the Days of Noah, that would be the "Days of Atlantis", mankind was under a serious threat of becoming extinct. The reason for that was the fact that angelic beings called "Watchers" came down and created a giant offspring with humankind.

The mere existence of these hybrids, known as "Nephilim", was the reason for the Most High JAH to send a Great Flood over the planet and create the atmospheric conditions so that these Nephilim would no longer threaten the existence of the human race.

It took Mystery Babylon ages and ages to create a situation wherein the Nephilim will once again threaten to kill off the human race. For thousands of years, mankind was more or less protected against a recall of the Days of Noah but in our time this protection seems to be less than before.

It was just a small item in the UK based Mirror newspaper:

Supermen and women "within five to 15 years", say scientists

Scientists will be able to produce supermen and women with sperm and eggs from stem cells "within five to 15 years".

The cells could be genetically modified, giving the potential for a breed of super-fit beings.

Scientists would be able to develop cells from potential parents, grow them in the lab and turn them into sperm or eggs.

It would take many more years to become reality but already the moral dilemma is under discussion. The main purpose would be to help people made infertile through cancer treatments.

Prof John Harris, from the Manchester University group exploring the issue, said: "Whether one should be queasy about genetic modification depends on what it's designed to do." ORIGINAL URL

The "main purpose" to create these "supermen and women", according to the British professor, is to "help people made infertile through cancer treatments".

There have been conferences in universities that dealt strictly with the question as to which rights the hybrids that are to be released from the test tubes in the Babylonian laboratories will be granted.

Implantable micro-chips turning people into cyborgs, cloning and fusing of human DNA with that of other beings (including so-called "aliens"), none of these things are science fiction as we read reports from all over the world telling us how gradually mankind is going to be replaced with what scientists call "the post human".

Where mankind is created in the Image and likeness of the Almighty, it is so that others would like to change that fact and they can only do so by changing humans into what the Creator would call a "beast".

It is foretold in the Book of the Apocalypse, how large portions of mankind would indeed give up their humanity and start to carry something called the "Mark of the Beast". If you don't carry that mark, you will not be able to participate in the shitstem they created, a shitstem called Mystery Babylon.

It is also foretold that the year 2012 will mark some kind of "transformation": the first year of the time wherein the scientists quoted in the Mirror article expect the first beasts to come out of the test tube in their Frankenstein-style laboratories.