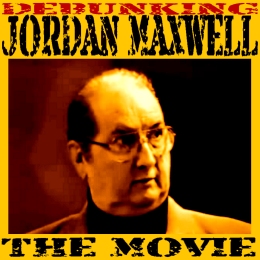 WWW, May 2008 - He's done everything that the students of the Babylonian Mystery Schools have to do, and is now teaching everything he learned to his audience.

The only problem is, that Jordan Maxwell claims to expose the very ones whose teachings he brings forward as truth.

Jordan Maxwell is a well-known author and lecturer. He is considered to be the mentor of Michael Tsarion and David Icke, while the recently released movie "Zeitgeist" was dedicated to Maxwell's teachings and works as well.

Maxwell will tell you "all" about Mystery Babylon, from the ancient times to the present day. He will expose the truth about 9/11 and will talk about the Illuminati and other shady groups that run the shitstem.

Nothing wrong with that, one can say. After all, exposing Mystery Babylon is a good thing. However, Jordan Maxwell isn't exposing her at all, and this movie proofs that without the shadow of a doubt.

In the first part of the video, we are introduced to some of his teachings. We learn, how he claims that the Name of JAH is an old Hebrew word for "an expression of sexual dynamic energy". We see, how he plays with words and, even more bizarre: He makes it seem that all ancient languages anticipated the arrival of the English language some centuries ago.

Furthermore, the video explores just where all of these teachings actually came from. It turns out, that Maxwell has taken everything he now brings forward as "truth" straight out of the Babylonian Mystery Schools. His claims can be read in books of Albert Pike (Founder of the KKK and Luciferian) and Mme Blavatsky (Writer of the "Secret Doctrine" and godmother of both the Nazi and the New Age Movement), but not anywhere else.

Nothing wrong with that either, some could still say. After all, he's bringing out the Secret Teachings to we-the-people. However, Jordan Maxwell is not just exposing these teachings for what they are. He is bringing them as the truth, the absolute truth.

Which brings us to the second part of the excellent expose. The part wherein we get to know the man called Jordan Maxwell a little bit better, too!

Yes, he has his own supernatural calling, it turned out. Beings who claimed to be from the Pleiades also claimed that Maxwell was in reality one of them and how he was sent to earth to be the emissary of these so-called ET's.

Yes, he had his initiation, it turned out as well. Jordan Maxwell did what all of the initiates do: he put himself in the sarcophagus at the Great Pyramid in Egypt and has his wonderful supernatural experience.

Even the name Jordan Maxwell turns out to be an esoteric one. He took it out of his favorite book: written my Mme Blavatsky and describing one Jordanus Maximus, part of Blavatsky's Luciferian Trinity. But don't say it too loud, though, for Jordan Maxwell doesn't want you to know.

Jordanus Maximus, self-titled "Godfather of Secret Societies" by the way, debunked? You bet!