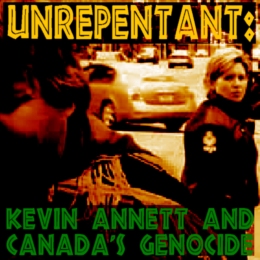 WWW, May 2008 - In almost two hours, we are being informed by eye witnesses about a genocide on the native people in North America that takes place even until this very day.

Undeniable evidence proofs a case that has been swept under the carpet of both Church and State in North America.

When the ancient Hebrews were led to the Promised Land, they had to kill many of the people on that land. An event that had nothing to do with killing other humans, as the text in the Bible reveals.

When the Divine Lord God and Saviour Yesus Kristos came down to earth to die and rise again for the sins of mankind, He came for the downpressed and poor. Babylon Shitstem sentenced Him to death, and subsequently crucified Him.

The early followers of Yesus were persecuted as well. It took Babylon about 300 years before "Christianity" was "legalized", made part of her shitstem. And from that day on, the most terrible form globalization began as the Roman Empire gained more and more land and power.

Fast forward over a thousand years, and we land in what is still called the "Golden Age": Christopher Columbus "discovered" America", the so-called New World.

Millions of people were killed, just because they happened to be living on the land where Christopher cs wanted to create what "founding father" Francis Bacon called in the title of one of his books: "The New Atlantis".

To get an idea just how far reaching the genocide on the original people of the American continents really was, and still is, we have to watch the documentary UNREPENTANT: KEVIN ANNETT AND CANADA'S GENOCIDE.

It's the story of a young Christian who became a minister for the United Church of Canada.

As he accepts his first job as a preacher of a local church somewhere in western Canada, he notices how there are only Europeans in his church where a large part of the local population were Natives from various nations.

After a while, he began to realize just what was going on: most of the Indians had no lust going to church, because they had been confronted with Babylon's "Christianity" in ways that cannot be imagined.

The Catholic Church, the Anglican Church and the United Church of Canada had no problem with their theological differences when it came to the native population of what is now known as Canada. Together with the state, they put laws and practice into place that, to say it mild, had a de-population of the Indians as the result. A de-population that went way above the 50%!

Just how did they do it?

Well, your children were taken from you when they were seven. After all, the law said that these children had to become "Christians". These children were sent to "schools" were they were subjected to a regime that would not stand out in a description of Adolph Hitler's death camps.

They were put in hot water tubs, snakes put in there too. Others were strapped to a bed and electrocuted. Many were subjected to medical experiments, not unlike Joseph Mengele's "scientific research". Little boys and girls were beaten and stabbed to death, often for the eyes and ears of their fellow "students". Having to dig graves for their dead friends was common practice as well.

When young minister Kevin Annett discovered all of this, he wanted to put his faith in Jesus into action and decided to open his church for the truth. He worked on reconciliation and tried to help the community in every way he could.

This was not accepted by the church, who had just too much skeletons in their closet. They spend CAN$ 250,000 to get rid of him, break his family, and make sure he would never be able to work again, not even in the secular world.

In his turn, Kevin Annett organized a tribunal where all the terrible things came to the surface. The truth came out in that tribunal held in the late 1990's. To no avail...

This extremely disturbing documentary tells his story and more important: we see the victims themselves as they talk about what happened to them. We see highly traumatized people, whose lifes have been totally ruined in the name of prosperity for the global shitstem that has been in place ever since the tower-of-babel incident ages ago.

It is a documentary that should be seen by everyone, if only because the real depth of the genocide against the native people of the America's.

You know it was bad, but this bad?