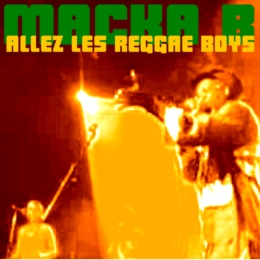 WWW, May 2008 - Macka B loves football, or soccer as they say in the America's. In this video, we see him performing live for the French based One TV as he gives a big up to Jamaica's football team The Reggae Boys.

Jamaica is a remarkable place on the planet. The relatively small island, just under the smoke of Castro's cigar republic, has witnessed the birth of Reggae Music, the Movement of Rastafari, and many more things that have their world wide influence.

Allez Les Reggae Boys is Macka B's tribute to the Island's national football team, but the UK based toaster points out that the team is symbolical for the strength of the people of Jamaica as a whole, too.