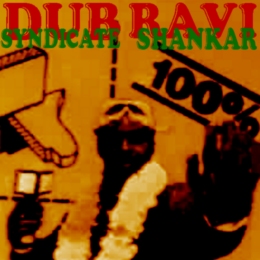 WWW, January 2009 - What happens when Indian Sitar virtuoso Ravi Shankar plays his instruments over a Reggae drum and bass line? Indeed: 25 years after the fact, we're still talking about it.

The year is 1984 and in the UK, we have Adrian Sherwood with his On-U Sound experimenting with just about everything one can experiment with when it comes to DUB. The producer also worked one this one: a collaboration between the British band DUB Syndicate and Indian Sitar player Ravi Shankar.

Shankar is one of the lesser known musical stars of the 1960's. It was the hippie time, when groups like the Beatles went to India to study what they perceived to be Hinduism. A time wherein the sound of the sitar was well sought after as it brought that vibration many were looking for.

25 years ago, the Hippies were already history. At least, the time of "peace, love and hippieness" had already been replaced by the colder vibe of the 1980's.

This did not matter to Adrian Sherwood then, as it doesn't matter to us now. What matters is: the Sound of Shankar's Sitar goes very well with the Drum and Bass lines of the DUB Syndicate band.