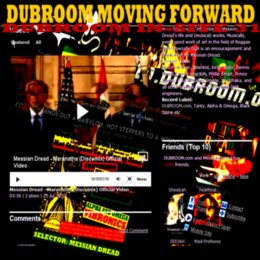 WWW, July 2010 - With ten episodes online and the next one in the planning, it's time for an update on this brand new Dubroom project. In which direction is Radio Dubroom moving towards?

Then, there is the new Dubroom MySpace page and an upcoming release and interview by/with yours truly...

As said in the previous update, the brand new Radio Dubroom Podcast could also be seen as Radio Dubroom 2.0 since we've had a show before. But there are differences and these differences make sure that the concept has to differ from the first one, which could only be streamed at live365.com in a very lo quality stream.

At live365.com we could basically play whatever we wanted, since there was a copyright contract and royalties were paid. However, prices have increased to a level which not possible for a non-profit website like the Dubroom to afford.

The Dubroom has permission to play a lot of music on the podcast, not just music which is reviewed on mp3.dubroom.org. We work hard to get more permission too, but in the meantime the catalogue out of which we can play already contains several thousands of tracks.

A lot of the music is available through the CreativeCommons copyright, which basically means you have to give credit to the producers/artists and not make money when you play a tune on your podcast. As you can see on mp3.dubroom.org, there are a lot of Net Labels releasing more than crucial material, especially in the UK and EURO DUB and ROOTS scene.

On top of the CreativeCommons music, the Dubroom also has a lot of free and legal MP3 files reviewed and linked to. Sometimes, the music is even available as a pre-release. We are also allowed to play that music in the shows.

We've joined a number of promo-lists, for example VP Records which has a long history dating back to the early days of Reggae in Jamaica and RadioDirect, a Canadian organization specialized in providing crucial music to you.

Since a large portion of Dubroom Radio is and will probably be filled with material from the European and UK based Roots/Dub scene, we are actively seeking permission to play music that we're actively promoting too. Alpha and Omega, Vibronics, Conscious Sounds Studio have already graciously given their permission for which we're ultimately thankful!

The Dubroom releases the podcasts via http://dubroom.podbean.com/, where we're also building an archive of Net Albums released under the CreativeCommons Copyright. This, however, is a project which will not be really interesting until at least a year from now.

All in all, hopefully you enjoy the podcasts and keep tuning in.

For those that like to know, we also recently logged in at Myspace.com and tried to overcome over a year of emails et cetera, updating the profile and a little bit more things. Oops... Anyway, it's updated now at http://www.myspace.com/messiandread

Also, expect -Jah Willing- a brand new release by yours truly: the Dreader than Dread riddim. It will -again- Jah Willing be played on the Zeph Report upcoming Saturday, where Zeph Daniel will have a talk with me about my music and my personal life. What have I been doing these last years and didn't want to talk about? Check it out at http://zephreport.com/.