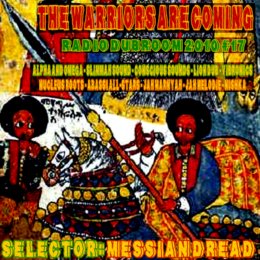 WWW, September 2010 - Powerful and militant riddims serve as the musical foundation on which the singers and Dub engineers do their excellent works. From the Swedish based LION DUB to the Netherlands with SLIMMAH SOUND to the UK where ALPHA AND OMEGA plus a whole number of other workers do their thing.
Just after the powerful opening by the Bush Chemists (Conscious Sounds Studio), the set presents the mighty "Jah is Calling You" riddim by the mighty UK DUB Twins Alpha and Omega: just the drum and bass alone give some crucial militant vibes but there's much more happening in the two different mixes.
Following the first segment, we're taken to a number of vocal tracks with their Dub versions. First is Jah Marnyah with some crucial words concerning the fact that the Babylonian church totally "ignored" the Book of Enoch, kept in Ethiopia, Nishka with a heartical plea to Jah children to consider the fact that yes, we are one body and should live like that as well. Cyrenius Black is up next, riding a Conscious Sounds riddim praising the Most High once more cause it can't be done enough, seen? Last tune of this chapter-and-version-segment is Earl 16 with the Abassi All-Stars, meditating on the fact that there's just too much homeless children with fathers who don't care about their children.
More Dub is to follow after the Dub part of the Abassi All-Star's "Surviving (Discomix)", LION DUB from Sweden to be exact. From their excellent Net Album a tune called People Rise DUB. Forward to Nucleus Roots from the UK with two Dubs and one vocal, ending with JAH MELODIE singing over another crucial SLIMMAH SOUND riddim, with a righteous call to "Get Active" cause there is just too much to do.
Yes, as Enoch foretold: the warriors are coming!
PLAYLIST
01. Bush Chemists - Raw Raw Dub (Courtesy Conscious Sounds)
02. Alpha and Omega - Jah is Calling (Courtesy Alpha and Omega)
03. Alpha and Omega - Jah is Calling (Courtesy Alpha and Omega)
04. Livication Riddim Section - Anointed One Version (Courtesy Vibronics)
05. Jah Marnyah - anointed One (Courtesy Vibronics)
06. Alpha and Omega with Nishka - Bind us Together (Courtesy Alpha and Omega)
07. Alpha and Omega with Nishka - Bind us Together Version (Courtesy Alpha and Omega)
08. Cyrenius Black - Jah Is My Rock + Version (Courtesy Conscious Sounds)
09. Abassi All-Stars - Surviving (Discomix) (Courtesy Universal Egg)
10. Lion Dub - Hold on Tight (FREE MP3 HERE)
11. Nucleus Roots - People Rise Dub (Courtesy Nucleus Roots)
12. Nucleus Roots - Irie Meditation (Courtesy Nucleus Roots)
13. Nucleus Roots - Meditation Dub (Courtesy Nucleus Roots)
14. Slimmah Sound and Jah Melodie - Get Active Dub (Courtesy Slimmah Sound)
15. Slimmah Sound and Jah Melodie - Get Active (Courtesy Slimmah Sound)