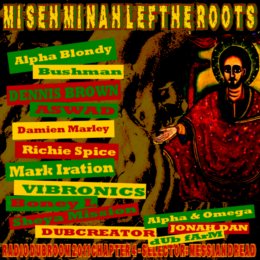 WWW, January 2011 - Starting off with no less than 6 new releases by VP records, it's clear that Roots Reggae is not about to perish in spite of statements you hear sometimes here and there by people who think that good music is a thing from the past. Chapter 4 of Radio Dubroom 2011 contains once again a healthy portion of Roots Reggae with a whole lot of DUB for your listening enjoyment!
The set starts off with a Dub from Cocody Rock by the African singer Alpha Blondy, followed by the vocal version. A great re-issue from VP Records! Bushman is up next with his brand new album livicated to Peter Tosh, followed by another classic, both in the original Discomix and a new version by Damien Marley and Nas: Dennis Brown with Aswad on the massive Promised Land riddim can't be refused!
Next up, two tunes by Richie Spice, one from a brand new release by VP Records and another available free and legal in MP3 download (look to the playlist for links).
Vibronics and Alpha & Omega form the bulk of the EuroDUB and Roots section which follows: vocalists like Boney L, Mark Iration and Jonah Dan are definitely no strangers for the listener of the better quality Roots and Dub available out there. Not so many of them might know of Gold Heart Music based in Sweden but Sheya Mission's "Feel Like Rain" along with it's Dub version should change that.
There's two tunes taken from the MP3.com Legacy, too: Amsterdam based DUB Creator with one of his early productions and the Dub Farm, complete with samples from the movie Rockers which simply states: "All of the Youths Shall Witness the Day That Babylon Fall!"
Another 85+ minutes of pure Roots and Culture!
PLAYLIST
01. Alpha Blondy - Cocody Rock Dubwise (VP RECORDS)
02. Alpha Blondy - Cocody Rock (VP RECORDS)
03. Bushman - Brand New Second Hand (VP RECORDS)
04. Dennis Brown and Aswad - Promised Land (Discomix) (VP RECORDS)
05. Damien Marley and Nas featuring Dennis Brown and Aswad - Land Of Promise (VP RECORDS)
06. Richie Spice - My Life (Street Life) (VP RECORDS)
07. Richie Spice - Trouble In the World (FREE/LEGAL MP3 HERE)
08. Vibronics and Mark Iration - Struggle (VIBRONICS)
09. Vibronics and Mark Iration - Struggle Dubwise (VIBRONICS)
10. Vibronics and Boney L - Jah Music (VIBRONICS)
11. Vibronics and Boney L - Jah Music Dubwise (VIBRONICS)
12. Vibronics and Boney L - Only One Love (VIBRONICS)
13. Vibronics and Boney L - Only One Love Dubwise (VIBRONICS)
14. Sheya Mission - Feels Like Rain (GOLD HEART MUSIC)
15. Sheya Mission - Feels Like Rain Dubwise (GOLD HEART MUSIC)
16. Dub Creator - Dub Generation (DUBCREATOR)
17. Alpha and Omega with Jonah Dan - Nah Lef The Truth (ALPHA AND OMEGA)
18. Alpha and Omega with Jonah Dan - Nah Lef the Truth Dubwise (But Roots) (ALPHA AND OMEGA)
19. Alpha and Omega - The Roots (ALPHA AND OMEGA)
20. Alpha and Omega - Break Every Chain (ALPHA AND OMEGA)
21. Dub Farm - Jah Witness (MP3.com LEGACY)
DOWNLOAD