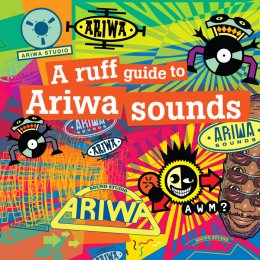 WWW, September 2014 - Vocal tracks, Discomixes and of course DUB Shots. "A Ruff Guide To Ariwa" has it all and look at the title: it's not a "Ruff Guide To Mad Professor"! The well-chosen title for this compilation of sounds from the London based Studio has a few classics from "back then", but it also features some of the -outstanding- work of Joe Ariwa. Not to mention the all-star list of further appearances, that is.

No, this is not an exaggeration.

It's one of the few studio's that were founded in the late 1970's, only to continue to this year 2014 and still release all forms of Reggae, from Lovers' Rock and Roots Daughters to Heavy, heavy Dub. Throughout the decades careers were launched, revamped, extended. Bringing consciousness on many levels and issues, being responsible for the incorporation of DUB in many musical styles (Massive Attack, Ruts DC) and thus spreading the vibe to millions and millions.

All this is captured in "A Ruff Guide To Ariwa Sounds". All this, and some more things. Like the crucial mixing skills of Joe Ariwa.

Listen, support, buy. Emusic is the cheapest option and no we're no Emusic affiliate.

LISTEN IN FULL FOR FREE: