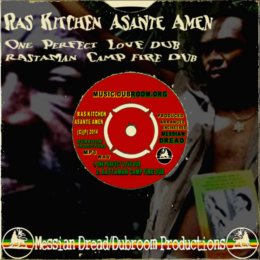 WWW, September 2014 - The second "virtual seven inch" featuring Ras Kitchen has a much deeper Roots and Culture vibe than the first one. Two heavy Roots Dub tracks, each having their very own distinctive vibe and approach. What both track have in common is the superb vocal singing of Asante Amen, Horns from Mad Professor's Ariwa studio and Messian Dread's Dubwise mixing.

Together, the two different tracks show the versatility and wideness of variety possible within Roots Reggae (Dub). In a way, it's also a statement concerning the use of "real instruments" versus programmed music. There is no "versus", there is just one thing: the rhythm of Roots Reggae as a means of communication. Playing and producing is one thing, knowing yourself and Reggae music is quite another.

Both tracks feature the vocals of Ras Kitchen and the very, very talented and skilled singer Asante Amen. Both men "happen" to be Rastaman, and a Rastaman comes with reasoning and with a meditation or a message if you will. Food for thought.

In one track, you'll hear Assante Amen chanting and praying for equal rights and justice which "happens" to be the state of reign when Babylon is finally downstroyed and the Most High rules visible for all mankind. Yes, this is when Righteousness will Cover the Earth as the Book of Life tells us. This fire is blazing in the hearts of all true Rastaman, and if you want to make the parallel between the Rasta Food that Ras Kitchen is cooking and explaining in the track and the reasoning Asante Amen gives as a Rasta Food for thought, you've made the same parallel as Messian Dread when he made this Dub.

In the other track, there is much more a dialogue between Ras Mokko and Asante Amen. Together, they chant down racism and point out to the One Love, the One Perfect Love that enables people of all color to come together. We do not want no division along racial lines and lies, so that we are all equal and there is no one race superior and another inferior. This is what the Rastaman works on on a global scale, this is the message to the world and not just from the two vocalist but equally from the producer of this free release.

When you like the music, consider donating a little bit of money Ras Kitchen and/or purchasing tracks by Asante Amen.

Please do not re-publish the actual music, because unlike Dubroom releases before 2014, this release is © Messian Dread/Dubroom. Available for free: 128 Kbps/320 Kbps MP3 Files, CD Quality Wave Audio.